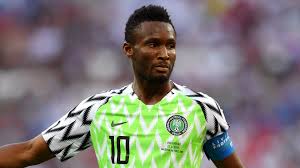 Football enthusiasts in Ilorin on Friday described Super Eagles Captain, Mikel Obi, as Nigeria’s “Super Hero”, following his decision to retire from national team duties. The fans told the News Agency of Nigeria (NAN) on Friday in Ilorin that Mikel had played his part and deserved to be celebrated.NAN reports that the former Chelsea and Middlesbrough midfielder made the announcement via his Instagram page on Thursday afternoon, after leading Nigeria to a Bronze medal finish at the ongoing 32nd Africa Cup of Nations (AFCON) in Egypt. Benjamin Madoka said Mikel served Nigeria wholeheartedly and should be celebrated.“Mikel is a Nigerian Super Hero. He has paid his dues in the national team and he has led by example. Every player must emulate Mikel by being patriotic,” he said. Kayode Babatunde described the 32-year-old as a living legend that worth to be referenced in the history book of Nigeria.“He is a good ambassador of his country; Mikel sacrificed everything for Nigeria. He sacrificed Chelsea for Nigeria and lost his place under Coach Antonio Conte,” he said. Another enthusiast, Mujeed Lawal, said the CAF Young Player of the Year 2005 would be missed in the Super Eagles team because of his immense contributions.“Mikel’s leadership qualities will remain in our hearts, as he once paid Hotel bills when the Super Eagles players were stranded at the airport a few years ago outside the country,” he said. According to Damilola Kareem, Mikel has put smiles on the faces of Nigerians and also made Nigeria more popular on the world stage in the sport.“His successes in the national team and at the club level have brought honour to his fatherland. He is a joy to watch when the commentator refers to him as a Nigerian international,” he said. Bolaji Segun described Mikel as more than a hero to Nigeria; he is “an embodiment of loyalty to national calls”.“He has won everything for us. Mikel won our hearts. All the best to the Legend.”NAN reports that Mikel won the AFCON 2013 gold; AFCON 2019 bronze; 2005 FIFA U-20 silver and Rio 2016 Olympics bronze in football in the country’s colours.