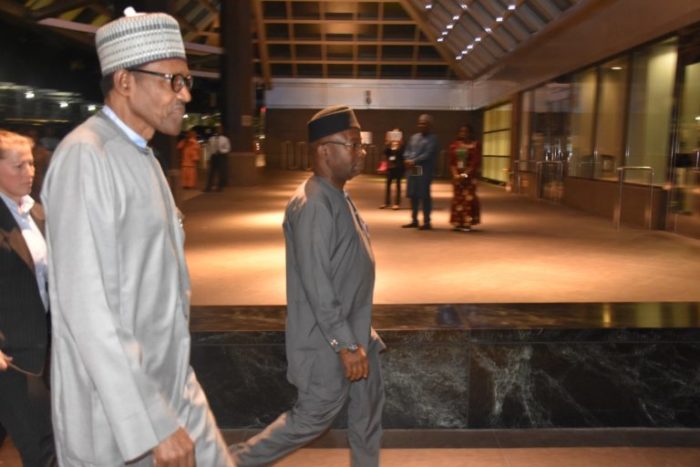 The Presidency has described the 74th United Nations General Assembly, which begins fully on Monday, as Nigeria’s “day in the sun’’.

Mr Femi Adesina, the Special Adviser to the President on Media and Publicity, stated this shortly after President Muhammadu Buhari’s arrival in New York on Sunday for the weeklong global event.

Answering questions from newsmen, Adesina hinged his comment on the recent emergence of a Nigerian, Amb. Tijani Muhammad-Bade, as the President of the UN General Assembly.

He said all eyes would be on Nigeria at the event considering the fact that a fellow citizen, Ms Amina Mohammed, is currently the Deputy Secretary-General of the UN.

“It is very significant; it is like Nigeria’s day in the sun because you don’t have it better than that.

“It is like focus would be on Nigeria, and it is a good one for our country’’, he said.

The presidential aide dismissed suggestion by some opposition elements that Buhari is attending the GA without a national agenda.

“So, anybody that says that does not understand,’’ Adesina said.

The president, who landed earlier at the John F. Kennedy International Airport, was accompanied by some top government officials and senior aides.

The theme for the UNGA74 is, “Galvanising Multilateral Efforts for Poverty Eradication, Quality Education, Climate Action and Inclusion.”

Buhari is scheduled as the fifth speaker during the General Debates billed for Tuesday.

Leaders of countries’ delegations are expected to “present their National Statements and speak to the theme of the session’’, Adesina said in a statement earlier.

He said the president would speak on ‘’administration’s commitment to building on the achievements of its three-point agenda following the renewal of his electoral mandate by majority of Nigerians.

“He will also reaffirm Nigeria’s position on salient global issues,’’ he said.(NAN)