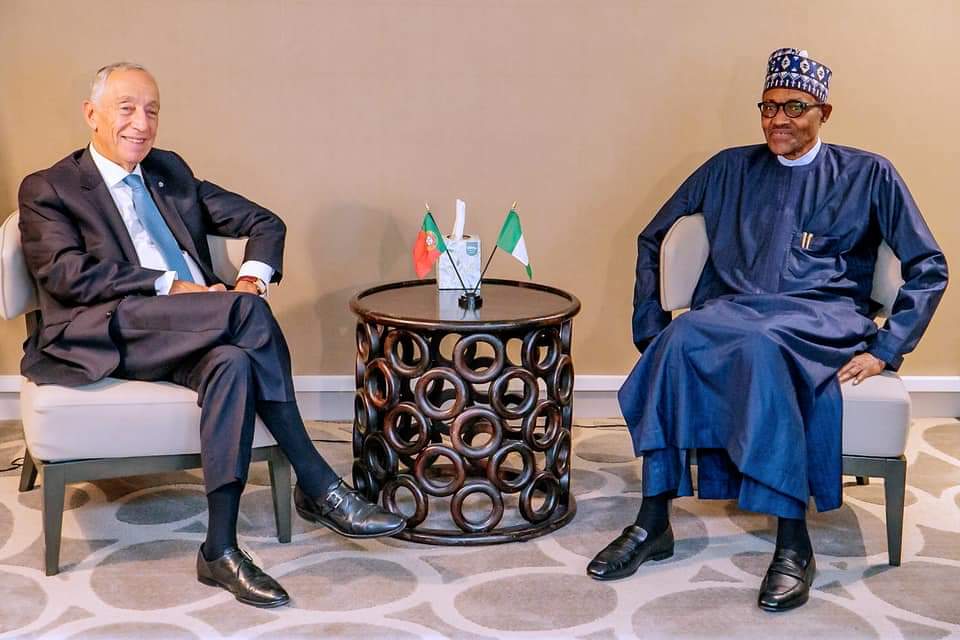 President Buhari to President of Portugal, Why We Focus on Security Infrastructure and Development

President Muhammadu Buhari Wednesday in New York, at the sidelines of the 74th UN General Assembly, met with President Marcelo Rebelo de Sousa of Portugal, and explained why Nigeria was investing heavily on infrastructural development.

“We are a large country, with vast population and poor infrastructure. But we need people to come and invest, that’s why we are focusing on roads, rail, power, airports, and many others. Without infrastructure, investment would be slow,” the President said.

He thanked Portugal for the “steadfast support” it has given Nigeria on many fronts, adding that “concern about global issues is genetic for Portugal.”

President Buhari said the Sahel was awash with illegal small arms, exacerbating the security situation in the North-east of Nigeria, but added that government was doing a lot to bring things under control.

On security in the Gulf of Guinea, he solicited for the support of Portugal, saying most of the stolen crude oil from Nigeria and other countries pass through the region.

President Buhari said in the second term of his administration, “we will consolidate on what we started in the first term, so that I can thereafter retire in peace and comfort.”

President de Sousa commended what he called “the excellent relations” between his country and Nigeria, noting: “We have Portuguese companies in Nigeria; we share the same opinion on international issues; we share your worries; follow closely what is happening in the Sahel, and we support you in fighting terrorism.”

Portugal hosts Euro-African Forum next year, and President de Sousa invited President Buhari to declare the event open in Lisbon, “even if it’s for half a day.”

He said it would be a great honour to have the Nigerian leader in Portugal, “and we have been waiting for you to visit for three years. Many African leaders have come, but we want Nigeria.”