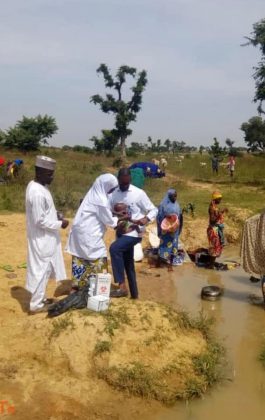 The campaign got underway on Saturday and is being implemented by the National Primary Health Care Development Agency (NPHCDA) and WHO, with the support of Gavi, the Vaccine Alliance.

Despite the availability of a vaccine, measles continues to be a leading killer of children globally, according to WHO.

“The measles vaccine remains the most cost effective preventive measure against measles and WHO is committed to supporting the Nigerian government in reaching every eligible child in the country with the needed vaccines irrespective of their location,” said Dr Fiona Braka, the UN agency’s Team Lead of the Expanded Programme on Immunization (EPI).

Dr. Joseph Oteri, Director of Disease Control and Immunization with NPHCDA, underlined the Government’s commitment to ensuring that the campaign reaches all eligible children in the north.

“We will go to markets, schools, churches, mosques and everywhere we can get good catchment to reach our target population. No child deserves to die from any vaccine preventable disease,” he said.

WHO has trained over 44,000 health workers and is mobilizing over 17,000 vaccination teams to support the campaign, which will target children in 19 states across the north.

He added that the country also lies in the so-called “meningitis belt”, which stretches from Senegal to Ethiopia, where most of the world’s cases occur.

Meningococcal meningitis, a bacterial form of the disease, is a serious infection of the lining that surrounds the brain and spinal cord. Fatality rates are high.

Gavi is funding the vaccines against measles and meningitis, as well as the operational costs for the campaign.

Overall, the organization has immunized more than 279 million African children against meningitis.

”I made a terrible mistake marrying my husband” – Woman tells court.

FRSC will not condone 2 passengers in front seat – Spokesperson