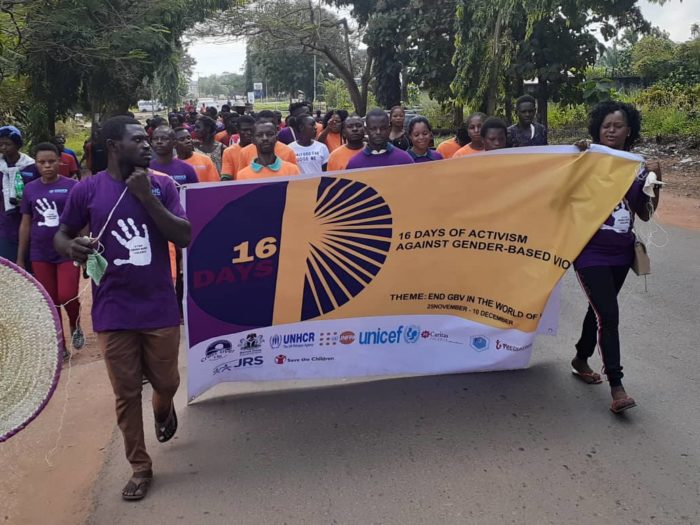 The United Nations High Commissioner for Refugees (UNHCR) has launched the 16 Days of Activism Against Gender-Based Violence campaign in Ogoja local government area of Cross River.

The campaign started with a walk by officials of the UNHCR, partners, host communities and the Cameroonian refugees from their resettlement camps in Adagom and Ukende communities.

Head of UNHCR sub-office in Ogoja, Mr Mulugeta Zewdie, called on all relevant government authorities to ensure that justice is made more accessible to victims of gender-based violence at all stages.

Zewdie, who was represented by Mr Derwin Djamaris, Protection Officer of UNHCR, said that the period was designed to acknowledge the gravity of gender-based violence.

He explained that justice was a crucial aspect of effective protection response to gender-based violence and also contributes to its prevention.

He said the 16 Days Activism campaign which runs until Dec. 10, would increase awareness and renew commitment to prevent and respond to abuses.

News Agency of Nigeria (NAN) reports that the theme for the 2019 activism is “End Gender-Based Violence in the World of Work”.

“UNHCR  is committed to ensuring that all persons of concern have access to existing justice mechanism; giving sexual and gender-based violence survivors a voice and restoring their dignity.

“Also, securing a remedy for the serious violation of their rights and ensuring their perpetrators are brought to justice must be a priority for all.

“The responsibility is not central to UNHCR’s mandate, it is a matter of human rights and has to be reflected in our own action as humanitarian workers,” he said.

He further said that sexual and gender-based violence remains among the most serious threats to the safety and security of those affected by displacement and conflict.

He noted that failure to investigate and prosecute sexual violence and the inability of victims to seek and achieve redress has eroded confidence in law enforcement actors and the judiciary.

NAN reports that the Global 16 Days Campaign was launched in 1991 and continues to be coordinated by the Centre for Women’s Global Leadership, running each year from Nov. 25 to Dec. 10.

The 16-Day period reinforces the recognition of violence against women as a human rights violation.