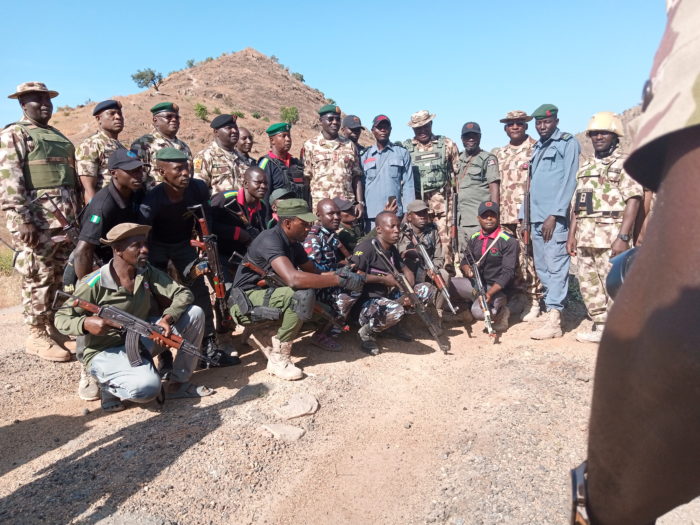 The Chief of Army Staff, Lt.-Gen. Tukur Buratai, has visited the Police Training College at Limankara-Gwoza and climbed the hills as part of operational visit to North East.

News Agency of Nigeria (NAN) recalls that the college is one of the critical security institutions overran by the Boko Haram terrorists during the peak of their activities in Borno state in August 2014.

The Limankara village where the college is located and indeed the entire Gwoza local government was under the control of the terrorists for months before the troops of Nigerian Army retook the area in 2015.

During the visit, it was observed that normalcy has since returned to the town with the residents chanting in excitement while the rebuilding works at the college has reached advance stages of completion.

Buratai was conducted round the college by the top police officers in the college.

After the ascent of the two hills, Buratai disclosed that the value of climbing the hills was borne out of the desire to feel what they troops feel in carrying out operations there.

According to him, if you don’t feel the pinch you will not know the impact of what your colleagues are also facing.

“This what they do virtually every day, they don’t only climb, they equally trek far distances and so it is good for us to appreciate what they are doing and we will be in a better state to understand their feeling and also address them as the case may be.

“As you can see, it is equally a morale booster because I have gone up there to see the observation course officer at the peak of this hill which is almost the highest around here.

“Seeing the chief of Army Staff with him there is something that he never imagined but this is encouraging them and to tell them we are with them,” he said.

Buratai commended the performance of the troops against the terrorists in the area and the north east in general, adding that the performance had been impressive and encouraging.

He said that the troops had exhibited high level of professionalism and resilience with the knowledge of the terrain, adding that they had continued to raid the hideouts of the terrorists.

“I am sure the progress is quite commendable and we hope as we enter the new year, they will be more result oriented operations to finally clear the remnant of the Boko Haram.

He said that the super camp concept had achieved its objective, saying it has helped the troops to have much understanding of the behaviour of the terrorists.

According to him, the initial misconception about super camps has been assuaged as well as the fears of the people and it is something that we will continue to build on to make sure we succeed at the end

Buratai, while wishing the people of the area a peaceful 2020, also assured them that the troops would continue to provide them security enable them enjoy more harvest from their farms.

“Let them keep supporting the troops and all of us and provide useful information that would be used in identifying the terrorists in the communities and around the bushes as well,” he said.