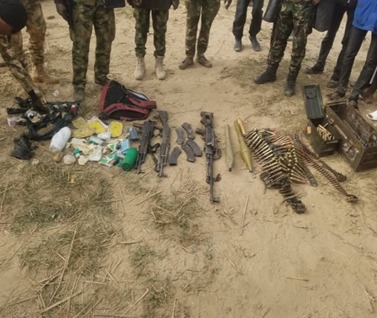 In yet another case of misadventure, on 2 January, 2020, some criminal Boko Haram insurgents attempted once again to infiltrate the serene town of Michika in Adamawa State in order to wreak havoc on its innocent and law-abiding residents. However, the combined troops of 217 Tank Battalion and elements of 144 Battalion swiftly rose in defence of the town as they gallantly repelled the said attack with devastating consequences on the marauding criminal insurgents. The criminals went to the town in Gun Trucks and motorcycles late afternoon and began sporadic shootings that caused uproar in the peaceful community thus compelling law-abiding residents to scamper for safety. Nevertheless, the courageous troops immediately mobilized, blocked and engaged the criminals with overwhelmingly superior firepower, forcing them to abandon their heinous intentions and retreat in disarray, albeit with high casualty in men and equipment. At the end of the encounter, 2 Boko Haram criminal were neutralised while unconfirmed numbers of both dead and wounded criminal elements were believed to have been hauled away by the withdrawing insurgents as indicated by the traces of their blood found along their withdrawal route. Additionally, one Boko Haram Gun Truck mounted with Anti-Aircraft Gun, 2 AK 47 Rifles, 4 AK 47 Rifle magazines, 2 motorcycles, one machete, some quantities of provision, food items, drugs as well as Improvised Explosives Devices detonating wires were captured by the gallant troops.

In a related development, on same day, troops of 144 Battalion responded to a distress call on an impending Boko Haram criminals’ attack on Kopa Village in Madagali LGA of Adamawa State. Enroute to the Village, the troops encountered a Boko Haram criminals’ ambush established to prevent troops counter action against their assailment on the town. In a rare demonstration of bold action, the troops effectively cleared the ambush as well as the subsequent meeting engagement which they had with the criminals’ main body at Kopa Village. During the twin encounter, 4 Boko Haram elements were neutralized. In addition, one Boko Haram Gun Truck, 2 motorcycles, one Anti-Aircraft Gun and 2 AK 47 Rifles were captured by the troops. Other items captured include 5 AK 47 Rifle magazines, 2 Rocket Propelled Grenade bombs, 2 bandoliers containing 311 rounds of 7.62mm Special ammunition, 250 rounds of Anti-Aircraft Gun ammunition, one incendiary bomb, one 36 Hand Grenade, drugs and some First Aid Kits.
Regrettably, one officer and one soldier were wounded in action as a result of both encounters. The wounded personnel have been evacuated to a military medical facility and are in stable condition. It is gratifying to note that peace and tranquility has since returned to the Community.

Additionally, on 4 January 2020, some defiant Boko Haram criminals who attempted to attack the Headquarters of 29 Task Force Brigade location at Jakana in Konduga LGA of Borno State were outgunned and handed a devastating defeat. The criminal insurgents approached the troops’ location in 6 Gun Trucks and a number of foot soldiers. However, the unwavering troops engaged the criminal insurgents in a fierce fire fight forcing them to scamper for their lives in utter confusion. At the end of the encounter, 6 Boko Haram criminals were neutralized. Additionally, one General Purpose Machine Gun, 3 AK 47 Rifles, 535 rounds of 7.62mm x 51 NATO (Belted) ammunition and one Rocket Propelled Gun bomb were captured from the insurgents.
Regrettably, one soldier paid the supreme price while 2 others were wounded in action during the encounter. The Wounded personnel were evacuated to a military medical facility and are responding positively to treatment. It is heartwarming to note that, one of the recently inducted locally produced Mine – Resistant Ambush – Protected (MRAP) Vehicles, the indigenous Proforce MRAP, which was employed during this encounter proved to be a reliable war fighting machine, as it provided the required mobility, protection, fire power and maneuverability for the fighting troops. The lethal war machine has thus been certified to be a highly successful effort at local defence equipment manufacture.

In a related development, on 3 January 2020, the combined troops of 5 and 29 Brigades and the Chief of Army Staff’s Special Intervention Battalion 2 conducted massive Raid/Cordon and Search Operations simultaneously at some identified Boko Haram criminals’ hideouts between Jakana and Mainok in Konduga and Kaga LGAs of Borno State respectively. Troops vigorously combed Matiri, Sheworam, Charikwenti, Burmari and Goni Bukarti astride Maiduguri – Damaturu Road. During the said operations, 6 Boko Haram suspects were arrested while an astonishing number of 461 Boko Haram captives comprising 100 men, 154 women and 207 children were rescued from the clutches of the criminal insurgents who have kept them hostages in their ancestral community. The rescued children within the Polio Vaccination age were instantly administered with the vaccine in line with the Buratai Intervention Task Force Initiative by the Nigerian Army Medical Team. All rescued victims have been promptly evacuated and handed over to Borno State Internally Displaced Persons officials.

In a separate incident, on 2nd January 2020, troops of 159 Task Force Battalion deployed at a Check Point along the Main Supply Route Damasak-Kareto in Mobbar LGA of Borno State rescued 4 minors aged between 10 – 14 years old. Preliminary investigation revealed that the victims were abducted from Damasak in 2015 by the Boko Haram criminal elements. The rescued minors narrated their ordeal in the hands of the Boko Haram criminals and how they escaped from a camp in Tumbun Gini during a recent onslaught by troops. It is heartwarming to state that the parents of the rescued minors were contacted and they have all identified their wards amid tears of joy.

The Chief of Army Staff Lieutenant General Tukur Yusufu Buratai commends the troops’ resilience and doggedness against Boko Haram and Islamic State West Africa Province hereby urges them to keep the pressure on the adversaries that are waging war against our collective peace, security and existence until they are completely wiped out of our national frontiers.