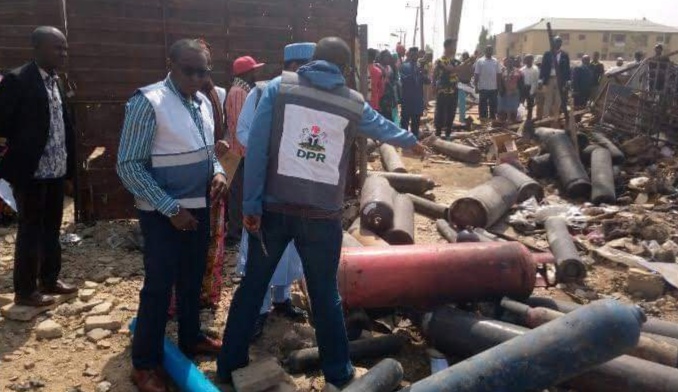 Illegal Transfer of Gas to Cylinder Cause of Kaduna Explosion

Preliminary investigation revealed that the cause of the gas explosion in Kaduna State was illegal transfer of gas into another cylinder by operators of the facility, the Department of Petroleum Resources (DPR) has said.

Head, Public Affairs of DPR, Paul Osu, stated this yesterday in Lagos, adding that the agency commiserated with the families affected by the incident.

According to the DPR, gas explosion was reported to have occurred at an unlicensed Liquefied Petroleum Gas (LPG) retail shop in Kaduna, resulting in fatalities.

“In line with our regulatory oversight on the oil and gas industry, the agency immediately mobilised our staff to the scene to investigate the cause of the explosion.

“We wish to inform the public that we are carrying out further investigation on the incident, and we will update them as soon as we conclude,” he said.

Many people lost their lives in the explosion that occurred about 1pm at the Sabon Tasha area, Chikun Council of Kaduna metropolis on Saturday.

Meanwhile, the governor, Nasir el-Rufai, has consoled the family of the chairman, Nigeria Atomic Energy Commission (NAEC), Prof. Simon Mallam, and others that lost their lives in the explosion.

The state police command said that five people were killed in the explosion, and two were burnt beyond recognition.

Sources said that the professor, who just arrived from America, had taken his grandson to a barber’s shop close to the retail gas outlet when the incident happened.

El-Rufai, in a statement signed by the Commissioner for Internal Security and Home Affairs, Samuel Aruwan, urged the families to take heart, while sympathising with those that sustained injuries in the explosion as well.

Also, the state government has promised to come up with safety regulations to protect lives of its citizens.

The deputy governor, Dr. Hadiza Balarabe, who visited scene of the explosion, commended the security and safety agencies for their teamwork, which saved some lives and buildings.

Mrs. Balarabe, Mr. Aruwan and other government officials also visited the victims at General Hospital, Sabon Tasha; St. Gerald Hospital; and Barau Dikko Teaching Hospital within Kaduna metropolis, though some had been treated and discharged.

The Operation Controller, Kaduna Zone, Isa Tafida, while condoling with victims of the explosion, lamented that the gas retailer operated illegally without even Category D licence.

He urged gas plant operators and retailers to obtain the required licence that would ensure safe handling of the product to avoid such accidents.