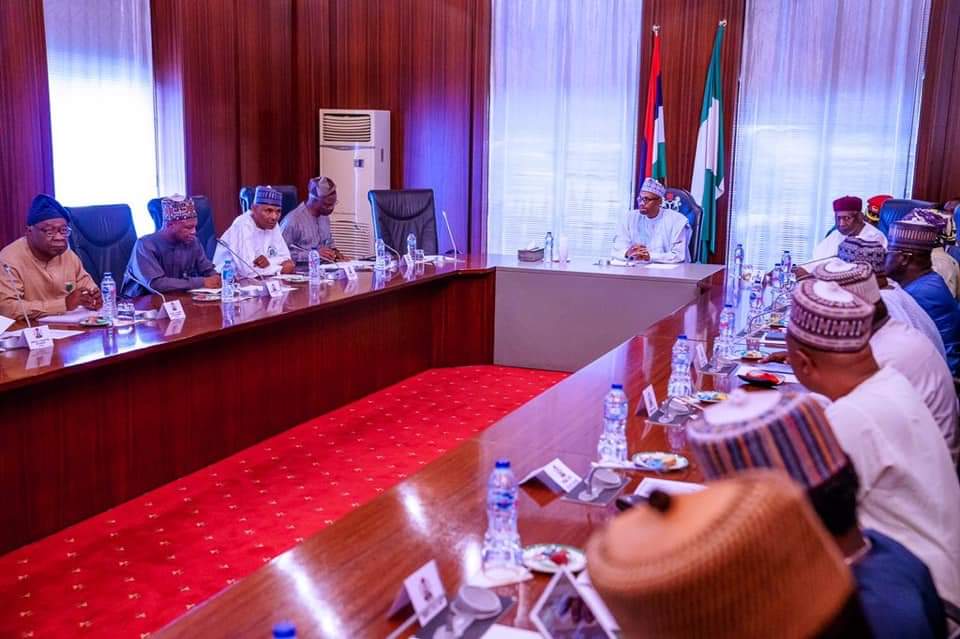 President Muhammadu Buhari Thursday received an important briefing by the new Economic Advisory Council (EAC), giving firm commitment that his administration will be bound by their advice on economy related matters.

At a meeting with the Professor Doyin Salami-led eight-member council at the Presidential Villa, Abuja, President Buhari gave the first directive from their recommendations that the Secretary to the Government of the Federation, Boss Mustapha, address immediately the observed lapses in coordination between ministries and all agencies of government.

In his remarks after listening to the report of macroeconomic importance and their views and recommendations, President Buhari said on the issue of coordination, that “the lack of synergy between ministries, departments and agencies would no longer be accepted. We are working for the country, not for personal interests. We have the same objective of service to the people and we will resolve this.”
Reviewing the work of the Council since its inauguration to replace the Economic Management Team (EMT), President Buhari said:

“I am highly pleased based on what I have read in your Executive Summary with the painstaking thoroughness of your preliminary report. I have noted the salient points of your report and these will be incorporated in government economic policies.”

Speaking about the challenges facing the economy and the tasks that rest on the shoulders of the members, the President noted that “the economy is the most delicate and sensitive of all aspects of national life. A little change in the matrix can lead to major disruptions in the national economy. For example, international changes in oil prices, bad harvests, conflicts in strategic global locations, a major epidemic or pandemic like the current Coronavirus, tariff changes in major world economies, to mention only a few examples that readily come to mind, can significantly affect our plans.”

President Buhari, who accepted that the EAC should now brief him more frequently, at least once every six weeks, instead of once every quarter, thanked the members for their patriotism and commitment in accepting the challenging responsibilities conferred on them.

“I cannot” he concluded, “thank you enough for your patriotism.”

Earlier in the submission of their report, Prof Salami, supported by interventions by Council members, responded to questions by the President and his team in which they outlined a number of challenging opportunities facing the economy, and proferred solutions to most of them.

In addition to the issue of synergy which the President addressed at the meeting, the Council raised concerns that the rate of the growth of the economy is slower than the rate the country’s population is growing; the need to strengthen national statistical agencies; reform procurement processes; improve education; and the need for job planning in training offered by academic institutions.

The Council also brought to the government their views on borrowing, macroeconomic stability and the need to provide a friendly climate for foreign investment.

“We need an environment that will attract investment. People will come only when they feel confident and when they come, their exit will not be challenging,” said Prof. Salami.

The council resolved to focus on legacy projects by the administration before 2023.
In addition to Prof. Salami, the Chairman, the Council is made up of Dr Mohammed Sagagi, Vice-Chairman and Prof. Ode Ojowu as members.

The two ministers in the Ministry of Finance also serve as co-opted members.