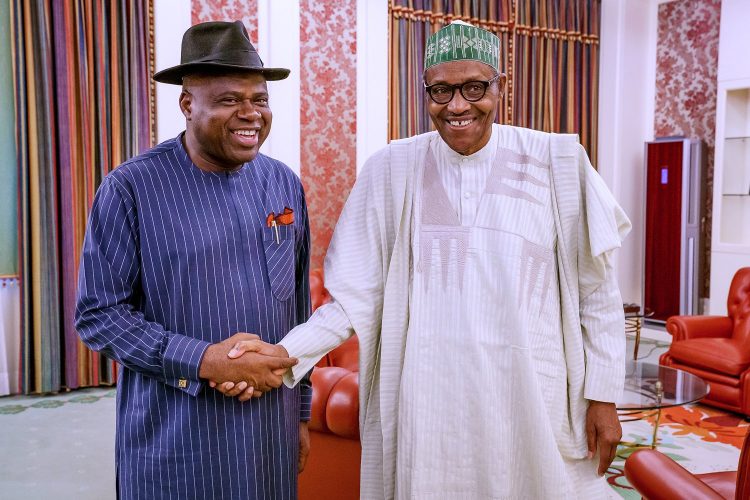 President Muhammadu Buhari on Tuesday met behind closed doors separately with Gov. Douye Diri of Bayelsa and the Economic Advisory Council at the Presidential Villa, Abuja.

Speaking to State House correspondents after the meeting, the governor described his visit to the State House as private.

Diri, who was sworn in as governor of Bayelsa following a Supreme Court verdict that ousted the governor-elect of the State, David Lyon and his Deputy, Biobarakuma Degi-Eremieoyo, said he met the president officially for the first time since his assumption of office on Feb. 14.

The apex court, in a unanimous decision by a five-man panel of Justices led by Justice Mary Odili, held that Lyon’s deputy, Degi-Eremieoyo, presented a forged certificate to the Independent National Electoral Commission (INEC).

Diri said: “Since I resumed as Governor of Bayelsa State, precisely on Feb. 14, I have not come to see the father of the nation.

“Today I just did that to come and see the father of our country and to work with the federal government of Nigeria in ensuring peace and stability in my state and ensuring the development of my state. That is what informed my visit to Mr President today.

“Mr President received me as one of his sons, as a governor of a state and he received me very warmly, I am very satisfied with the reception.

“As I said earlier, Mr. President received me as one of his sons, as a state governor and the reception was very warm.

“He went ahead to advice that he was happy that I came and that he was happy with the way I have started. He went on to say he has read about all the statements that I have made and the security so far in Bayelsa.’’

The governor also quoted President Buhari to have promised to partner with the Bayelsa State Government in ensuring peaceful atmosphere to boost socio-economic activities in the state.

“He (Buhari) promised as one of his sons, a state like Bayelsa that is critical to the security and peace in the Niger Delta, he was prepared to also work with me,’’ he added.

News Agency of Nigeria (NAN) reports that the outcome of the meeting between President Buhari and members of the Economic Advisory Council was being awaited as at the time of filing this report.(NAN)