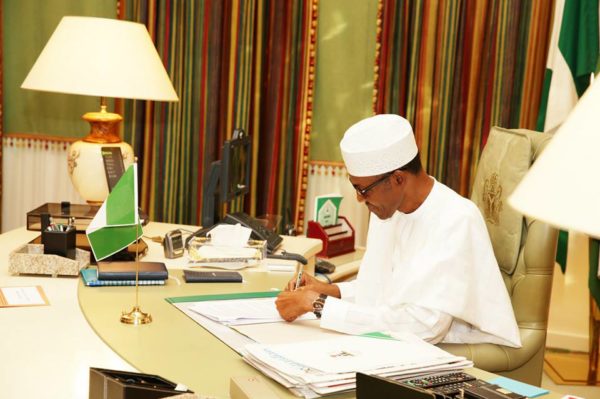 What President Buhari Has Done, and Is Doing on COVID-19

March 23: The Independent National Electoral Commission announced suspension of all activities for 14 days.

March 24: The Joint Admissions and Matriculation Board suspends activities for two weeks.

March 24: The National Examination Council announced an indefinite postponement of the 2020 common entrance examination into 104 Unity schools in Nigeria, which was scheduled to hold on 28 March.

March 24: The Federal Capital Territory Administration ordered the immediate closure of shops in the markets and neighbourhood centres, except those selling food items, medicines and other essential commodities.

March 24: FCT also directed the immediate suspension of gathering in churches and mosques.

March 25: Government announced the closure of Asaba airport with effect from March 27; land borders from March 29.

March 26: CBN announced Covid-19 fund contributions by seven Nigerian billionaires and banks. Access Bank Plc, Nigeria’s biggest lender by assets, is teaming up with Africa’s richest man, Aliko Dangote, to provide treatment and isolation centres across Africa’s most populous nation as it braces for the impact of the coronavirus.

March 27: Federal Government released 10 Billion Naira to Lagos State, and 5 billion Naira special intervention fund to NCDC to equip, expand and provide personnel to its facilities and laboratories across the country.

Closure of the nation’s international Airports and Land Borders for four weeks in the first instance, to enable the country put up the appropriate policies, processes and infrastructure to cope with suspected and confirmed cases at home, without risking compounding of the situation with more imported cases.

Only cargo vessels that have been at sea for more than 14 days would be allowed to dock in the ports, after the crew have been tested and confirmed disease-free by the Port Health Authorities.

NCDC to draft all its recent retirees back into service to beef up manpower.

Furthermore, all NCDC staff and experts who are away on training or international assignments are to return immediately. Nigerian Air Force (NAF) conducting an evacuation mission to bring back some of Nigerian specialists in Central Africa, to enable them support the national response.

March 27: President Buhari commends the monetary policy authorities for their financial intervention to support entrepreneurs and companies. Government also looking at fiscal measures to minimise the negative impact of this pandemic on the livelihood of millions of Nigerians.

Government begins the process of reviewing the federal budget.

President Buhari directs the Minister of Industry, Trade and Investment, to work with the Manufacturers Association of Nigeria (MAN), to ensure that production of essential items such as food, medical and pharmaceutical products continues.

The Minister of Health stated that of the 65 Coronavirus cases, 40 had immediate travel history to one or more of the Coronavirus affected countries in the last two weeks;10 are close contacts of confirmed cases; 6 had neither a recent travel history nor a known contact and 6 were detected on an offshore oil vessel. He further revealed that, 3 persons had been discharged from treatment and one fatality was recorded. The Minister affirmed that 61 currently active cases are clinically stable with mild or moderate symptoms.

The Minister of Health hinted that Lagos State is currently the epicentre of COVID-19 outbreak in Nigeria, stating also that the Lagos State government and the ministry of health had scaled up their response activities as the Nigeria Centre for Disease Control supports them as well as other affected states, through the rapid response teams deployed.

The minister emphasised that health facilities and health workers at all levels should be on high alert and maintain a high index of suspicion to give full cooperation to contact tracers everywhere. He added that while train stations, land borders and international airports remained closed, precautionary measures should be taken by FG to protect sea ports.

The minister emphasized the containment strategy of social distancing which he said, had been repeatedly announced. He added that directives had been issued at National and State levels to limit large gatherings, including religious, social and political gatherings, school events etc.

March 27: A circular was issued by the Head of Civil Service of the Federation (HCSF) directing public servants on Grade Levels 12 and below on non-essential roles to work from home.

Contact-tracing is on-going to identify persons who had been in close contact with confirmed cases.

The Federal Ministry of Health is working closely with States and the Presidential Task Force on COVID-19 to review response activities, and initiate measures to protect the health and wellbeing of Nigerians. The Multi-Sectoral Emergency Operation Centre (EOC), led by NCDC coordinates it and other national response activities

NCDC launched a WhatsApp APL, a free to use service to provide a central source of accurate, verified and current information on COVID-19 in Nigeria.

The Minister of Health also emphasized that the NCDC hotline is available 24/7 and toll free and that various states also have hotlines that could be called for direct state specific questions on COVID-19, while urging citizens to use them legitimately for reporting and enquiries.

March 30: 11pm: Lockdown begins in FCT and Lagos, as directed by President Buhari.