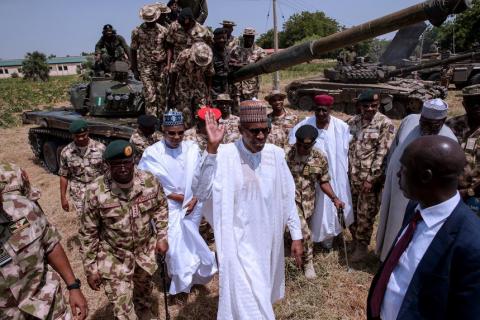 Abdul JimohJuly 16, 2020 3:08 pm 0
President Muhammadu Buhari has despatched top security chiefs to interface with stakeholders in Zamfara on the lingering security challenges in the North West.
The Inspector-General of Police, Muhammad Adamu, said  that the meeting with stakeholders would review the security situation in the area and adopt strategies to tackle the situation.
Adamu made the disclosure when the security chiefs paid a courtesy visit on the Emir of Gusau, Alhaji Ibrahim Bello at his palace in Gusau on Thursday.
Adamu said that the meeting was part of Federal Government’s efforts in tackling insecurity not only in Zamfara but the North West zone in general.
“We are sent to Gusau today by President Muhammad Buhari as part of his concern on security challenges in Zamfara and North West in general.
“Mr President gave us matching order to stop the current insecurity in this region.
“He directed us to come and talk to the stakeholders and identify the remaining challenges that have not been taken care off,” the IGP said.
“We need to strategize our efforts in addressing banditry, kidnapping and other forms of crimes in this zone.
“We hope during the close door meeting with stakeholders, we will be able to discuss the remaining challenges.
“During the close door, we are going to discuss several issues concerning security issues in the state and North West in general with a view to have general solution”, he added.
In his remark, the Emir thanked the security chiefs for the visit, and pledged that the traditional institution would
“continue to pray and advise you in the efforts at tackling insecurity.
“We appreciate the efforts of security agencies, we want to advise that there is need to strategise and adopt new  measures in addressing the situation.
“We want efforts to be focused on tackling bandits’ informants existing within the communities.
“We have information that in this state some people are giving out on rent and selling houses to bandits.
“We are calling on government to promulgate a law to ensure arrest and prosecution of those providing weapons to bandits,” Bello said.
The News Agency of Nigeria (NAN) reports that the IGP was accompanied by the Directors General, Department of State Security Service, Yusuf Magaji, and National Intelligence Agency, Ahmad Rufai, Chief of Defence Intelligence, AVM Muhammed Saliu and other top security chiefs.