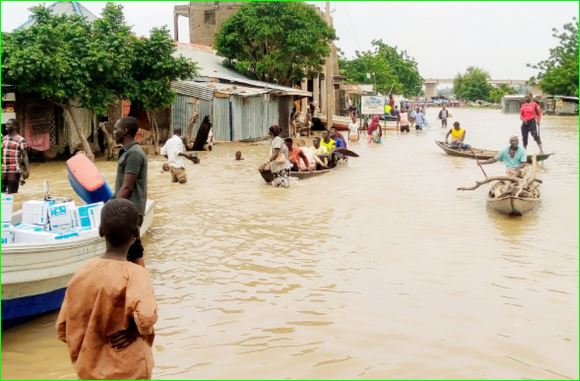 The National Emergency Management Agency (NEMA) on Friday appealed to the residents of Jalingo  to avoid settling along the riverine areas to prevent them from flooding.

Mr Igue Terungwa, the  Head of Search and Rescue Unit at  NEMA Operation’s Office in Yola,  made the call during the sensitisation programme on 2020 flood warning alert in Jalingo Local Government Area.

Terungwa stressed that  there was the  need for residents to be enlightened about the risks involved in flooding.

He warned residents against consumption of flood water, pointing out that the water could be contaminated.

Terungwa advised residents to use alternative sources of water.

He also warned that flood could bring reptiles from distance locations, urging residents to be vigilant about their environments before, during and after flooding.

Terungwa said that the agency had initiated the awareness campaign to prevent human distaster and to forstall negative impact of flooding in communities.

He also advised residents to get acquainted with  the weather forcasts and other warnings from the Nigerian Meteorological  Agency (NIMET).

In his address, Alhaji Abdulnasir Boboji, the Chairman of Jalingo Local Government Area;  commended NEMA for the initiative.

Boboji said that  the council would continue to partner with the agency to ensure that  the awareness campaign gets to  the grassroots’ level.

According to him, “The people from the grassroots are in dire need of this sensitisation and I am happy that you are more proactive now than ever”.

NAN reports that the NEMA team proceeded to Jekhunou, Shaukani, Murkuni and Numbanhoru communities in Kona to continue with the exercise. (NAN)