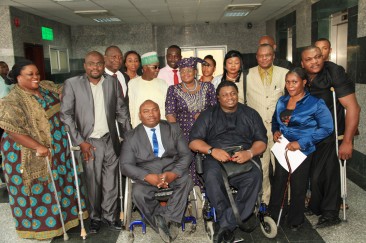 NGO commends President Buhari for creation of Disability Commission, appointment of governing board

The Global Hope and Justice for the Less Privileged, a Non-Governmental Organisation (NGO) has commended President Muhammadu Buhari for the establishment of the National Disability Commission and appointment of its governing council.

The News Agency of Nigeria (NAN) reports that President Buhari had on Monday, Aug. 24, approved the appointment of James Lalu as the Executive Secretary, National Commission for Persons with Disabilities.
The President also announced the composition of the governing council of the commission.

A statement issued on Wednesday in Abuja by Mr Paul Ihekwoaba, Executive Director of the organisation, described the establishment of the commission as a welcome development.

Ihekwoaba also congratulated all the appointees into the Governing Council of the Commission, saying ”to whom much is given, much is also expected.

“It is therefore my prayer that the wisdom and grace to succeed in this onerous task be given to each and every one of you.

“I also enjoin all members of the disability community both those for and against to please support this new disability project and let’s give them the necessary support by whatever means possible.’’

The appointments were in fulfillment of the provisions in the Discrimination against Persons with Disabilities (Prohibition) Act 2019, according to a statement by the spokesman to the President on Media and Publicity, Mr Femi Adesina.

According to the Act, the commission shall be headed by a Part-Time Chairman and six members who shall be Persons with Disabilities representing the geo-political zones of the federation subject to confirmation of the Senate for a four-year term of office in the first instance.

The person may be reappointed for a second term of four years and no more.

The Executive Secretary, who shall be responsible to the council for the implementation of the policies and administration of the daily affairs of the commission, shall also be a Person with Disability with a five-year tenure in the first instance and may be reappointed for a second term and no more.