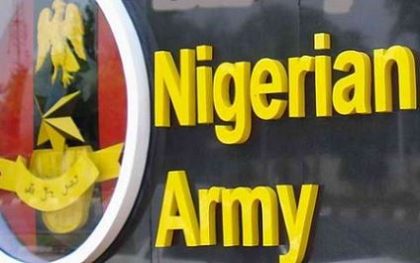 Lt.-Gen. Tukur Buratai, Chief of Army Staff, has commended Gov. Inuwa Yahaya of Gombe State for allocating land to the Nigerian Army for the construction of barracks for the 301 Artillery Regiment.

Buratai spoke on Thursday in Gombe, when he paid a courtesy visit to the governor.

The News Agency of Nigeria (NAN), reports that Buratai was on operational tour in the North East, inspecting military units and formations, particularly those under Operations Lafiya Dole.

According to Buratai, we want to commend you for the land you have allocated for the construction of 301 Artillery Regiment barracks and offices.

“We have started developing the land; we are going to relocate to the place which is our permanent site with enough facilities for training.

“We also want to thank you for the support you have been giving to us in the fight against insurgency.

“As we are planning to move to our permanent site, we will require additional support from you,” he said.

In his response, Gov. Yahaya said that Buratai had done a lot in restoring peace to the North East and the entire country and his contribution would be cherished forever.

He said that Gombe State due to its centrality in the region was facing so many challenges because of the influx of Internally Displaced Persons (IDPs), social amenities and other facilities were overstretched.

He further pledged continued support for the Nigeria Army and other security personnel in the state to ensure peace and stability.(NAN)