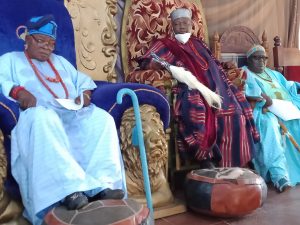 Oba Wahab Oyedotun, the Orangun of Ila in Osun, has warned non-native farmers in the area whose land was used for the construction of Police Mobile College to withdraw their court case against the Federal Government or leave the town.

Oba Oyedotun, along with other monarchs, told a news conference on Tuesday in Ila-Orangun, Osun, that the land was given free to the government for the construction of the college.

The monarch said while farmers who were natives of the town had agreed with the decision of the community to give the land for free, about 600 non-indigene farmers had instituted a court case against the government for compensation.

“We are aware of the fact that some people, numbering about 600, presented themselves as new claimants for additional compensation in court.

“We dissociate ourselves from these claims and Ila-Orangun Indigenes see actions of the alleged farmers as intentionally calculated to forestall the economic development of the town and scare away potential investors.

“We use this opportunity to inform all non-natives, who are in court to withdraw their claims on the government, otherwise we will have no alternative than to evict them from our land, as their holdings on our land are not in perpetuity.

“Any none-native who cannot abide by our decision is free to leave our town or be ready to be declared enemy of the town,” the monarch said.

The monarch, however,  said the people of the town were not against any amount of government deemed desirable within its means to give to deserving and identified farmers.

Oba Oyedotun, who noted that the land was given free to the claimants by the community, said there was no need for them to be making claims from the government.

The monarch said the little money contributed by the community to be given as compensation to farmers was rejected, adding that the claimants insisted on getting compensation from the government.

Earlier in his remarks, Oba Adedokun Abolarinwa, the Orangun of Oke-Ila, said the college had brought joy and glory to the town since the time it was established.

Oba Abolarinwa said both indigenes and non-indigenes of the town should continue to support the development of the town and the college. (NAN)