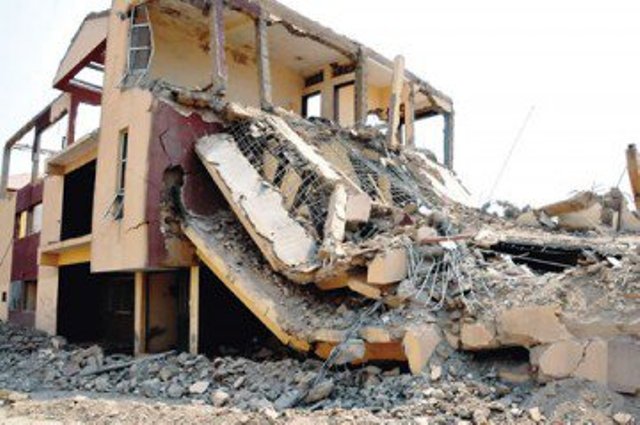 The Delta Government has sealed off 15 buildings in Asaba to reduce incidences of building collapse in the state.

This is contained in a statement issued on Wednesday in Asaba by Mr Chidi Nwuko, Chairman, Delta State Taskforce on Operation Show Your Building Plan.

He said that developers of the sealed buildings failed to tender approved building plans within the stipulated time given to them or had none at all.

Nwuko said the enforcement became necessary to stem the tide of building collapse, protect the environment and ensure adherence to proper planning.

Recall that on Sept. 12, a story building under construction in Asaba collapsed, leaving one person dead and four critically injured.

Also at Ughelli a boy identified as Gbenga who just finished his West African Senior School Certificate Examination (WASSCE), was knocked down by a collapsing fence along Damure street in Ughelli, killing him instantly.

In Okpanam, Oshimili North Local Government Area of the state, a firefighter, Ben Aladino and family members narrowly escaped death in their apartment when an overhead water tank collapsed in their living room.

“It became necessary to nip in the bud the recurrence of construction collapse that could have been as a result of lack of approved building plan.

“Such compliance will help eliminate building or construction collapses capable of causing wanton damage and in extreme cases, lives,” he said.

Nwuko urged land and property developers to embark on any form of development as a matter of responsibility to adhere strictly to standard procedures.

While commending property developers who follow due process, he frowned at those who flagrantly disregard them, warning that the law would catch up with them. (NAN)

NEWER POSTSpeech by President Buhari at the Unveiling of the Theme and Logo for Nigeria’s Anniversary Celebration
OLDER POSTAfforestation: NGO tasks FCT residents on tree planting