Dr Bashir Jamoh, the Director-General, Nigerian Maritime Administration and Safety Agency (NIMASA), has reaffirmed the agency’s commitment to the establishment of a strong and sustainable national fleet. 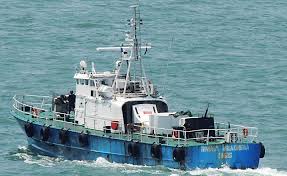 Jamoh in a statement in Lagos on Wednesday said that the desire for a Nigerian shipping line was gradually being achieved.

Jamoh said this while receiving members of the National Fleet Implementation Committee, who paid him a courtesy visit at the agency’s headquarters.

He told the team led by the committee chairman and Executive Secretary, Nigeria Shippers’ Council, Mr Hassan Bello, that the need for a national carrier “cannot be overemphasised’’ owing to the enormous economic benefits it offered.

According to him, there is no better time to have a national carrier and develop the maritime industry than now, when the world is gradually looking away from fossil fuels, which currently forms the mainstay of the Nigerian economy as President Muhammadu Buhari is trying to diversify the economy from oil.

“Nigeria cannot be caught unawares; we need to look at ways of developing our shipping sector, which from studies, is capable of earning the country even more than oil annually,” he said.

Jamoh said that the Nigerian maritime sector had the potential to grow between three and five per cent annually due to the size of the local market but regretted that this capacity remained mostly untapped.

He said that since the liquidation of the Nigerian National Shipping Line (NNSL) in 1995, the country had been looking for avenues to float a national carrier, though through private sector participation.

The director-general said that the Federal Government had over the years put different measures in place to stimulate the maritime sector due to its strategic importance to the economic fortunes of the country.

He said the country needed to learn from experience in order to avoid the pitfalls that ruined the NNSL.

“We need to have a sustainable national shipping line in order to avoid the reasons the NNSL was liquidated.

“The committee must focus on ensuring that the implementation stands the test of time.

“The agency’s commitment to fully and actively supporting the drive for a wholly Nigerian-owned and operated fleet is unwavering, and this is one of the main pillars that NIMASA is built upon.

“It is also the third leg of the tripod driving the development agenda of the current management at NIMASA,” he said.

In his remarks, Bello said the committee was at a critical stage of the national fleet implementation process, stressing that capital injection was required at this juncture to actualise the project.

“The quest for a Nigerian fleet is essential in ensuring that the country regains control of its external trade, thereby opening up the economy.

“This is a perfect time for Nigeria to invest in its own fleet with global dependency on oil projected to dwindle considerably by 2030 and alternative power sources replacing fossil fuels in many countries.

“Consequently, a mono-economy such as ours should be diversifying into other revenue streams with maritime being a major potential earner,” he said.

Bello said the primary objectives of the committee were to create employment opportunities for Nigerians; reposition the Nigerian maritime sector and generate revenue for the Federal Government.

He said it also had economic benefits to businesses ancillary to the maritime sector such as the logistics and services.

Speaking in support of the leading position taken by NIMASA in the push for a wholly Nigerian-owned, manned and operated fleet, Aminu Umar and Isaac Jolapamo, both members of the National Fleet Implementation Committee and ship owners, commended NIMASA for its active role in the fleet implementation process.

The Federal Government, through the Minister of Transportation, Mr Chibuike Amaechi, having identified the need to diversify the economy and address the imbalance in the maritime industry, decided to establish a private sector-led Nigerian maritime fleet to participate in the carriage of the country’s import and export cargo.(NAN)