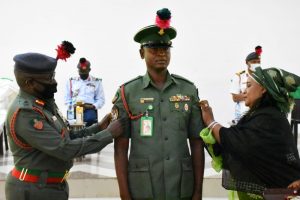 The Commandant of the Nigerian Defence Academy (NDA), Maj.-Gen. Jamil Sarham, has urged the 103 newly promoted soldiers serving in the institute to be loyal and exhibit valour which is associated with the military.

Sarham gave the charge on Thursday in Kaduna while decorating the soldiers with their new ranks.

the commandant as saying that it was vital for the soldiers to remain loyal to the military and the nation and to face their duties with courage and responsibility.

He reminded them of the high faith and trust Nigerians have in the armed forces and charged them to always act responsibly and courageously in the face of dangers.

The News Agency of Nigeria (NAN) reports that among the decorated soldiers is the academy’s Regimental Sergeant Major, MWO Sa’ad Mohammed, who was elevated to the rank of Army Warrant Officer. (NAN)