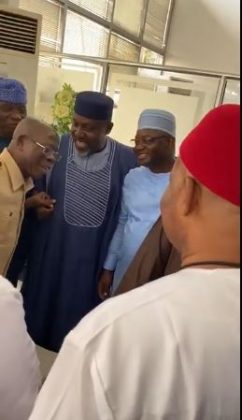 The National Chairman of All Progressives Congress (APC) Mr Adams Oshiomhole has reconciled Sen. Hope Uzodinma, the new Governor of Imo,  and former Governor of the state Sen. Rochas Okorocha.

The reconciliation came few hours before Uzodinma was sworn-in as governor of the state.

Okorocha and Uzodinma took opposing camps during the 2019 governorship election after Okorocha’s support for his son-in-law Mr Uche Nwosu, to succeed him.

But Oshiomhole who supported Hope Uzodinma in the governorship election, was spotted in a video from The Cable making them to laugh while reconciling them.

As they shook, Uzodinma was heard saying in Igbo and pidgin “Agadaga nwoke (hefty man), I don catch you na”.

Oshiomhole, on the other hand, sang:  “We are reconciling; we are reuniting; as victory comes our way, we put the past behind.”