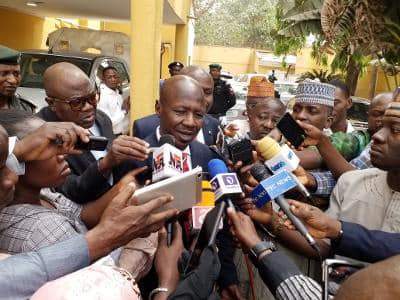 The Acting Chairman of the Economic and Financial Crimes Commission (EFCC), Mr Ibrahim Magu said that there would be massive fight against corruption in this year 2020.

EFCC Chairman made the statement on Tuesday, 21st of January 2020 during his visit to the the Ilorin Zonal office of the commission in a bid to further ensure efficiency in the system.

Mr Magu noted that no high profile individuals involved in corrupt allegations would be shielded from prosecution, stressing that “all of them would be arraigned as soon as investigations are concluded. There is going to be massive fight against corruption this year.”

He said that the campaign against corruption had just started, noting that more looters would be repatriated back to the country for prosecution