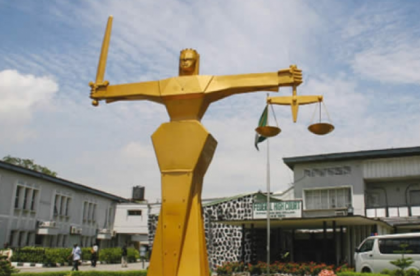 The police arraigned 33-year-old Eze together with Raphael Nwachukwu, 36, before  Chief Magistrat T. A. Ojo.

The defendants, whose residential addresses were not given, are facing charges of conspiracy and stealing.

The News Agency of Nigeria (NAN) reports that while Eze admitted guilt,   Nwachukwu pleaded not guilty.

Ojo remanded Eze pending review of the facts of the case and sentencing, and admitted Nwachukwu to N100, 000 bail with two sureties in like sum.

She ruled that the sureties must be gainfully employed and have evidence of two years’ tax payment to the Lagos State Government.

The chief magistrate adjourned the case until Jan. 29 for Eze’s sentencing.

Earlier, the prosecutor, Sgt. Kenrich Nomayo, told the court that the duo conspired and unlawfully interfered with some people’s SIM  and ATM cards.

Nomayo said the defendants could not give a satisfactory explanation on the ownership of the items.

He said that they committed the offences on Jan. 10 at 11.00 p.m. on Akerele Street in Agege, a Lagos suburb.

The prosecutor told the court that the police on patrol arrested the defendants while lurking around for more victims.

“The police searched them and recovered 16 different SIM  cards and ATM cards  which they could not give a satisfactory account of,” he said.

The alleged offences violate sections 287 and 411 of the Criminal Code of Lagos State, 2015 (revised).