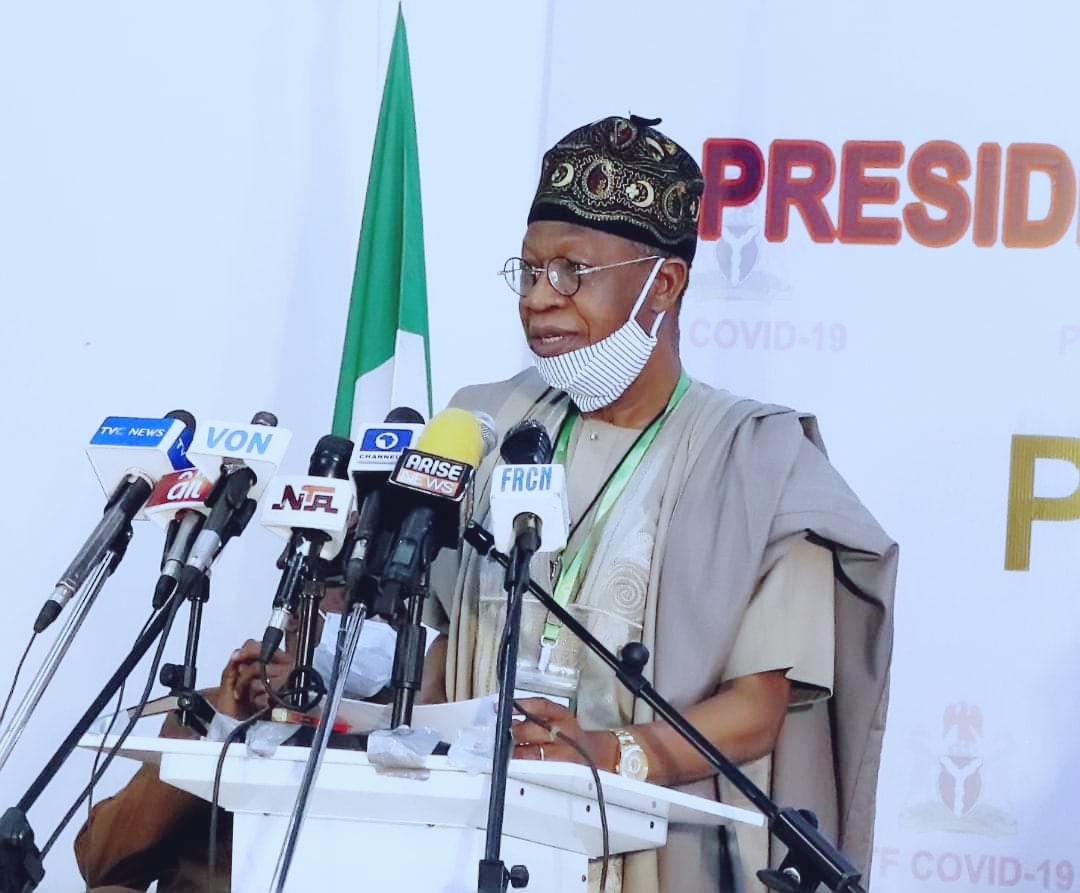 Although a respected opinion poll, the NOIPolls, has shown that 99% of Nigerians are aware of COVID-19, the Federal Ministry of Information and Culture and its agencies have ramped up their public enlightenment and advocacy campaign to continue to reach Nigerians with information on how they can protect themselves and avoid contracting the disease.

This is necessary because, in the absence of vaccine or drugs, Non Pharmaceutical Intervention (NPI) remains the most effective way to contain the spread of the disease and protect Nigerians. The campaign has therefore continued to focus on the need for the populace to adhere strictly to social distancing and mass gathering restrictions, wear face mask and ensure good personal hygiene.

The Ministry has now rolled out a new set of TVCs and radio jingles focusing on the NPI interventions. The TVCs and the jingles, in English, Pidgin, Hausa, Igbo and Yoruba, have started playing on the NTA and the FRCN. We are in the process of rolling them out on state
and private radio and television stations across the country. We have no choice since information remains the most potent tool that can be deployed against the virus today.

NTA, FRCN, NAN and VON are also fully engaged in the public enlightenment and advocacy campaign. These agencies have used their own resources to produce TVCs and jingles, which they have continued to air and disseminate, in addition to devoting a large chunk of their programmes and time to the campaign.

I am also happy to announce that, contrary to the belief in certain quarters, the National Orientation Agency (NOA), despite lacking adequate resources, has shown creativity in its bid to take the campaign to Nigerians. The agency has leveraged its relationship with
NGOs and the private sector to produce Information, Education and Communication (IEC) materials which are now being disseminated to Nigerians in English, Pidgin and some of the major indigenous languages. The NTA and the FRCN have provided their platforms for the dissemination of these IECs. The advantage here is that some of these materials can also be disseminated to Nigerians through their phones, thus helping to spread them quickly and widely

The next phase of the public enlightenment and advocacy campaign is to develop and disseminate IEC materials on the need to avoid stigmatizing those who have contracted the virus; the need to shun fake news and the need to reach those who are visually-challenged and hearing impaired. We have already started working on this.

In the meantime, the National Broadcasting Commission (NBC) has taken steps to prevent misinformation via the broadcast stations by warning them to adhere strictly to the professional ethics of balance and fairness in reporting COVID-19.

In particular, the Commission has warned the stations against bringing on their programmes ‘panellists’ with agenda to make reckless statements and insinuations.

The Commission, in its warning letter to the broadcast stations, quoted the relevant sections of the Broadcasting Code.

For example, the NBC quoted Section 5.4.1, which says ”The broadcaster shall at all times ensure that the coverage of a disaster or crisis is aimed at overall public interest, guidance and safety.”

It also quoted, among others, Section 4.1.1, which says panellists in a discussion programme must reflect various viewpoints.

The Commission has warned that failure to adhere strictly to the provisions of the Broadcasting Code will attract sanctions, as stipulated by the Code.