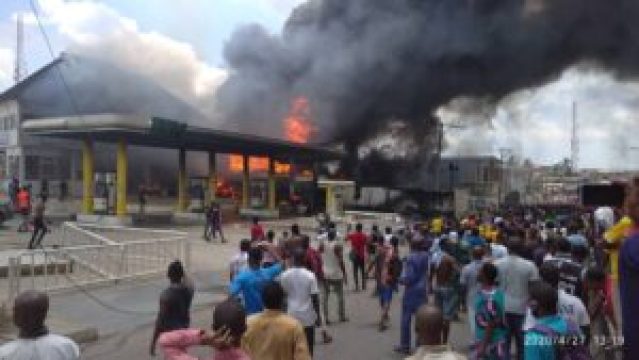 The Director-General, Lagos State Emergency Management Agency (LASEMA), Dr Olufemi Oke-Osanyintolu, on Tuesday said the fire outbreak at Nigeria National Petroleum Corporation (NNPC) filling station, Ifako-Ijaiye, Lagos, has destroyed 30 vehicles. The filling station is located at YayaYaya Abatan bus Stop, off Colleage Road, Ifako-Ijaiye Local Government Area of Lagos State. Oke-Osanyintolu said this in an interview with the News Agency of Nigeria (NAN) in Lagos. According to him, a tanker with 33,000 litres of diesel catches fire while discharging its contents into an underground tank at the NNPC filling station. “The agency officials received a distress call at about 1 p.m. on April 27, concerning a fire outbreak at NNPC filling station located at Yaya Abatan bus stop, off College Road. “The agency’s response team personally coordinated by myself, other emergency responders jointly fought and subsequently extinguished the flames at about 4.49 p.m. “No casualty nor fatality was recorded, about 30 vehicles were affected. The combined effort of the emergency responders led to the salvage of properties and buildings nearby,” he said. Oke-Osanyintolu said present during the recovery operations were the state Commissioner for Special Duties, Mr Tayo Bamgbose-Martins; Chairman Ifako Local Government Council, Apostle Toba Oke; Federal and Lagos State Fire Services as well as National Emergency Management Agency (NEMA). He said that other security agencies present were Rapid Response Squad (RRS) and Nigeria Security and Civil Defence Corps (NSCDC). Oke-Osanyintolu said that four recommendations were provided to prevent future fire outbreaks such as continuous sensitisation and advocacy on fire safety measures by relevant government agencies. Others, he said, were encouraging installation of fire extinguishers at both public and private domains, and fire hydrant at filling stations. Also, ensuring that onlookers stay safe by keeping away from the flames and observe social distancing while freeing the responders to carry out their work unhindered. In a related development, he said a suspected leaked Pipeline disgorged petrol (PMS) at Peace Estate, Iyana Odo, Oripako Stream Inward Baruwa, Ipaja. The LASEMA director-general said that the agency’s Response Team received a distress call in respect of a suspected PMS leakage from a pipeline at Iyana odo at about 11.00 hours on Monday. He said that when its response team got to the scene, it was discovered that there was a Pete leakage flowing downstream towards Iyana Odo, Ori Pako axis from an unidentifiable source point. Oke-Osanyintolu said that the actual point source of pollution could not be ascertained owing to the nature of the area being a wetland with flowing streams and pipelines buried underneath. He said that the  residents were subsequently sensitised and advised to ensure they do not carry out any activity that would ignite fire. Oke-Osanyintolu said that the concentration of the leaked petrol had reduced likely due to vaporisation and rapid movement of water down stream, resulting in no imminent hazard while the immediate threat level ascertained had been contained. He, however, said that SEPA and NNPC officials had been notified for necessary action by locating the point source of pollution to mitigate against future disaster in the community and contamination of the flora and fauna. (NAN)