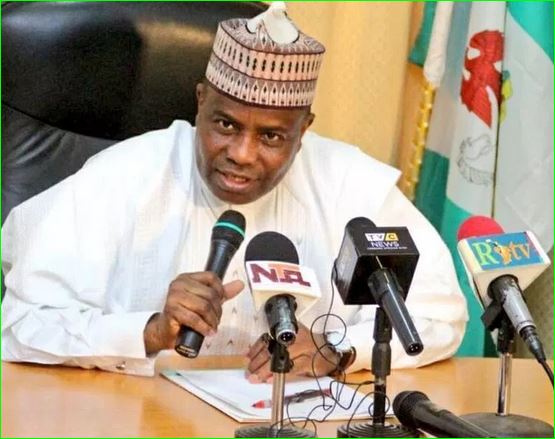 Gov. Aminu Tambuwal of Sokoto state has announced the death of three COVID-19 patients in the state.

Tambuwal disclosed this in a statement signed by his Special Adviser on Media and Public Affairs, Malam Muhammad Bello.

The governor noted that all the three victims had history of other diseases such as diabetes, asthma, and high blood pressure.

The News Agency of Nigeria (NAN) reports that the state’s Chairman of the Taskforce Committee on COVID-19, Dr Muhammad Ali Inname, had on Monday confirmed 8 new cases of the coronvirus, which took to 10, the total number of infected persons in the state.

Inname, who is also the state’s Commissioner for Health, said that eight new cases were recorded on April 26 and were all among the 32 traced contacts from the index case recorded in the state.

He said that the second case was recorded on April 23 and that all the traces had been investigated.

He added that they were all quarantined, while all the positive patients were isolated.

Inname gave an assurance that investigation was still on to unravel the circumstances surrounding the infections, as the first case, which was recorded on April 19, had no travel record.

According to him, at least 59 people have so far been tested in the state.

He added that the testing centre at the Usman Danfodio University Teaching Hospital, (UDUTH) in Sokoto, was functional and had all the required test kits.

He explained that 279 health personnel were mobilised for the fight against the coronvirus while about 3,000 volunteers had filled forms to become participants.

The commissioner urged health personnel to always consider other cases beyond the coronavirus, such as Lassa fever, Meningitis, and Hypertension, among others.

He noted that a committee was constituted to monitor deaths and burials in the cemeteries as well as establish contact with hospital managements on the percentage of deaths to ensure careful and immediate interventions.

He advised people against unnecessary panic, saying that the situation was under control.

He, however, stressed the need for people to adhere to recommended safety regulations  such as hand washing with soap, wearing face masks, use of hand sanitisers, and social distancing, among others.

The committee chairman added that sub-committees against COVID-19 were inaugurated at senatorial zone levels for continuous surveillance at the grassroots to monitor the influx of returnees as well as passers by using remote routes.

According to him, COVID-19 infections are in categories, namely: milder form, moderate case, and severe case.

He noted that some might be infected and could go on without notice.

Inname commended the governor for his support toward the success of the exercise, saying that retired medical personnel who are indigenes of the state were recalled and placed on the same levels they left service to complement efforts of those still in service. (NAN