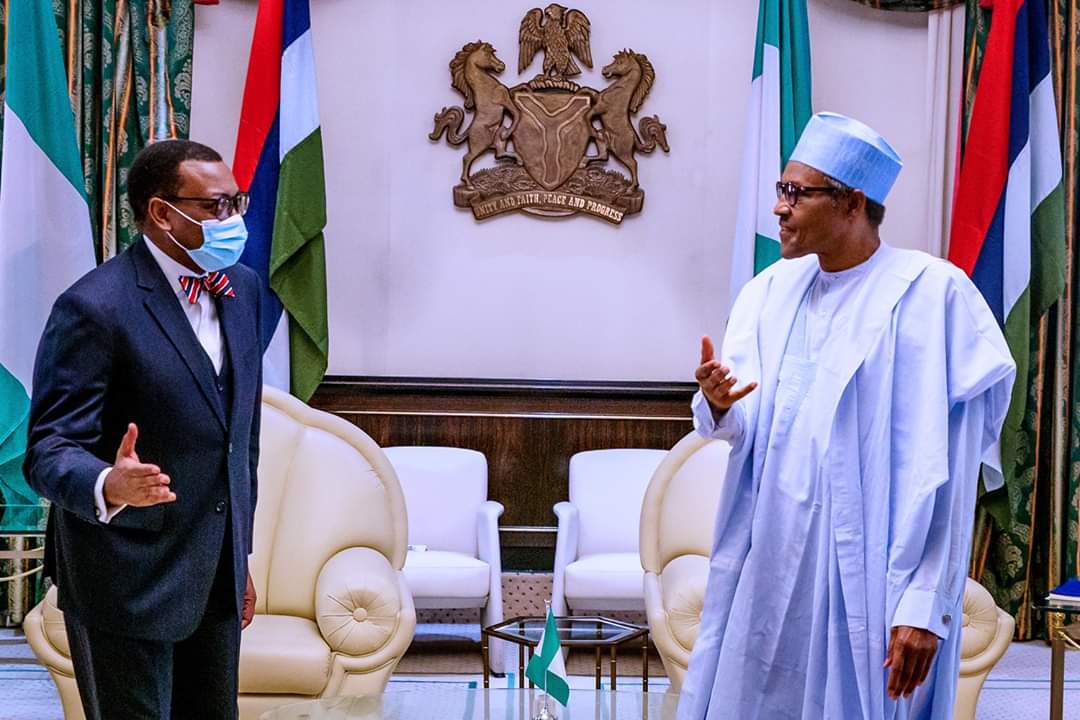 By his bow tie, you know him. And that distinguishing feature was firmly in place when Dr Akinwumi Adesina, President of the African Development Bank (AfDB), breezed into the Presidential Villa at Abuja on June 3, 2020.

One of the hallmarks of seasoned, methodical people is patience, refusal to be rushed or stampeded. Since the alleged breach of ethics saga at the AfDB broke into the open, President Muhamadu Buhari had not said much, at least, not directly. He rather watched developments, got briefings, and weighed his options.

Like the seasoned soldier that he was, an officer and gentleman, President Buhari kept his gunpowder dry. Till he fired on Tuesday. And the echo reverberated round Africa, if not the world.

Impatient Nigerians, ever willing to excoriate, had been complaining that the President hadn’t waded directly into the AfDB matter, where one of his citizens was about to be given the shorter end of the stick, in an onslaught led by America, one of the key stakeholders of the bank. When the Ethics Committee investigated and exculpated Adesina, President Buhari hailed the development. When America asked for reinvestigation, leaning on Adesina to step down while the process lasted, Zainab Ahmed, Nigeria’s Minister for Finance, Budget and National Planning, and one of the Governors of AfDB, wrote a decisive letter, condemning and rejecting the decision. On whose behalf did she do that? On behalf of Nigeria, and its President. Yet the professional complainers said the President hadn’t spoken. Their usual refrain is ‘talk to us, talk to us, you must talk to us.’ And when he speaks, they pretend not to hear.

When the fullness of time came, as President Buhari usually elects to do, he spoke personally. And loud and clear.
The aviation sector in both Nigeria, and Abidjan where Adesina is based, were still under lock and key. What to do? President Buhari reached out to the Ivorien authorities for special landing permit, and despatched a presidential jet to fetch the AfDB president, an illustrious son of Nigeria, and a former Minister of Agriculture under the Goodluck Jonathan government.

Adesina and his team of two close aides were seated in the diplomatic room of the Presidential Villa fifteen clear minutes before the scheduled time. This writer was also there, along with some Ministers and senior aides of President Buhari.
On the dot of the hour (he rarely misses it), President Buhari strode in. Ramrod straight, a fact that belies his 77 years of age. He gave his guest an elbow shake from a distance, which caused us all to laugh. The President was being correct heath-wise, as demanded by the social distancing requirement of the COVID-19 pandemic.

With initial greetings and courtesies concluded, Adesina was the first to talk. He thanked the President for facilitating his visit, and for the support he had always given him as AfDB boss, right from his first election in 2015.

“Thanks for helping me to get elected, and for your unflinching support for me over the years. Thanks for your public statement in my support after the Ethics Committee of the Bank finished its work, and exonerated me of all 16 allegations against me, “ Adesina began.

Some lies have been concocted against me to render me ineligible for a second term as AfDB president. The bank has its rules, regulations and laws. And part of it is that any allegation must be substantiated with facts, evidence and documents. This is so that there can be believability, and nobody can act out of malice.

In all the 16 allegations against me, there were no facts, no evidence, no document. The Ethics Committee investigated for three months. They asked for evidence. The accusers could not bring any. My defense was in 250 pages. Not a line of it was questioned.

The laws of the bank say when the Ethics Committee has concluded investigations, the report must be transmitted to the Chairman of the Governors of the bank. It was so done, and I was exonerated of all the allegations. If I’d been found wanting, then another investigation could be launched. But since there was no charge, that should be the end of the matter, according to the rules. But the accusers want to bend the rules, asking for reinvestigation. They say they don’t trust the rules, regulations, the Governors, and the Board of the bank. Their motive is to soil me, and soil the bank.

They are leaning on other countries that hold shares in the bank to support reinvestigation, and that I should step aside for that process. It is against the laws, rules and regulations.”
Adesina’s first term ends on August 31, this year. Election should have held by now, if not for the Coronavirus challenge. It would hold before the terminal date, and the African Union has endorsed the incumbent as the only candidate from the continent. Will the accusers muscle their way through, and get an interim administration installed ?

Then President Buhari spoke. He went down memory lane, recalling the role he played as President-elect of Nigeria then, in an election that held on May 28, 2015, a day before his inauguration.

“I personally wrote all African leaders, supporting your candidature. I recommended you, though you were a Minister of the People’s Democratic Party (PDP), and I was of the All Progressives Congress (APC). I didn’t because of that withhold support from you. I’ll remain consistent because no one has faulted the step I took on behalf of Nigeria.”

President Buhari pledged to work with all African leaders and stakeholders of the bank to mobilize support for Adesina’s re-election. He said the man had done well, and one good term deserves another.

When people from the north of the country call President Buhari Mai Gaskiya (The Honest One), they know what they are saying. He doesn’t talk tongue-in-cheek. He says it as it is. If any fault had been found in Adesina, he would also have told him point blank that he wouldn’t get support from Nigeria. May God give us more men like the Mai Gaskiya, who don’t call white black, and vice-versa.

In a private chat with Dr Adesina later, he told me something which I would never forget, and which I’ve filed away in my memory. He said it’s a Zambian proverb, which goes thus: “When you’re walking on water, your enemies say you are kicking dust.”

Kicking dust while walking on water? Hahahahahaaaaaaa.
Bad people will always remain who and what they are. Bad.

Adesina is Special Adviser on Media and Publicity to President Buhari