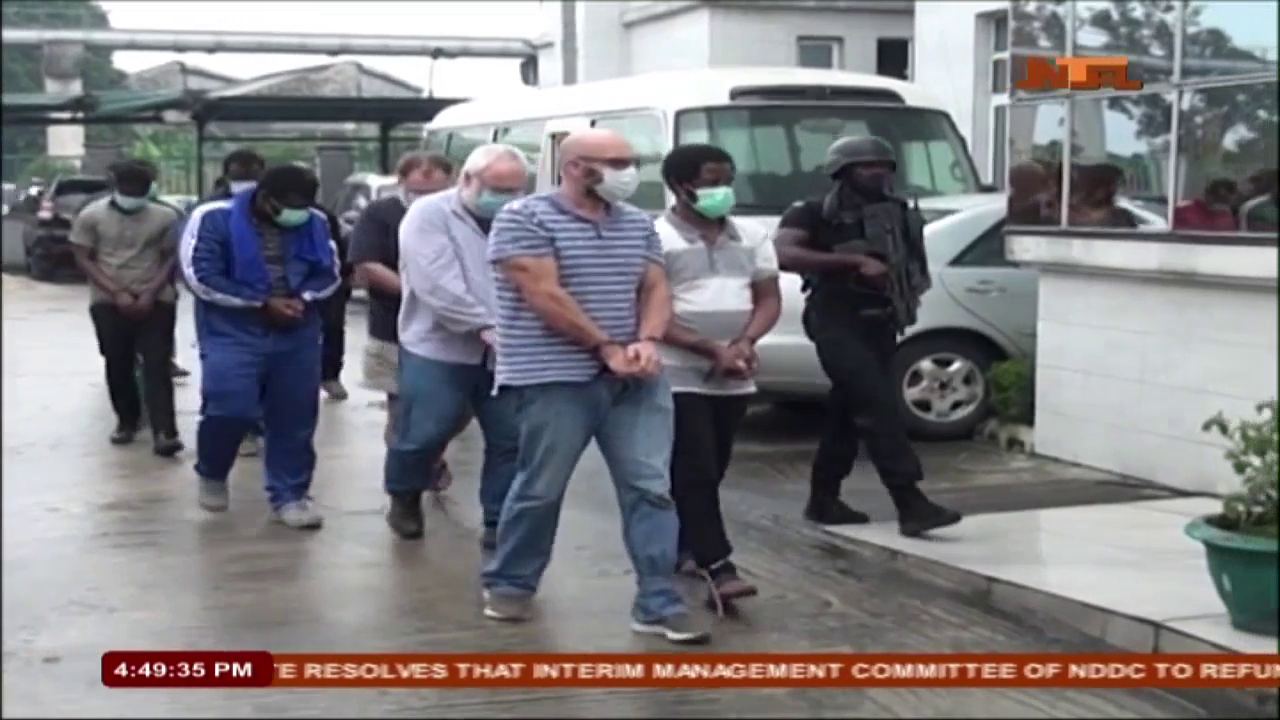 The Federal Government on Thursday arraigned three foreign nationals and six Nigerians for their alleged roles in the hijack of Equatorial Guinean Vessel, MV Elobey VI.

The suspects and employees of Pilgrim Africa Limited were arrested by the Nigerian Navy in Port Harcourt following allegations that they conspired and paid 200,000 dollars to a gang of pirates who abducted three sailors.

They were accused of facilitating to pay the ransom to the pirates for the release of two Moroccan nationals, Abaamrane Hamid and Chalabi Abdelaziz, and an Equatorial Guinean, Santos Ndong.

The defendants were also accused of conveying the hostages to Calabar, Cross River, for onward hand over to the Equatorial Guinean Consul after payment was confirmed by the pirates.

They are facing a seven-count charge of conspiracy, kidnapping, terrorism as well as illegal possession of firearms and ammunition before Muhammed Sani, the Chief Judge of the Federal High Court sitting in Port Harcourt.

The nine suspects, however, pleaded not guilty to the charge brought against them.

Laraban urged the court to commence the trial and remand the suspects in a correctional facility pending the determination of the matter or the bail application filed by the defendants.

“Kidnapping and terrorism-related offences are an organised crime that is done by syndicates.

“Some people take part in the piracy and kidnap, others negotiate for the ransom while another engages in the retrieval and recovery of victims in exchange for benefits,” he said.

On her part, the defence counsel, Abimbola Akeredolu (SAN), prayed the court to grant bail to the defendants on liberal grounds.

Akeredolu promised the court that the applicants would be available in court till the conclusion of the matter.

“My clients have been kept in solitary confinement since May. This is sad because there is really no charge here.

“The people who paid the ransom contracted my clients to take the victims of kidnapping from where they were released to their embassy.

” After doing that, my clients were arrested,” she said.

The judge, who promised speedy hearing of the matter, adjourned the case till Aug. 10, 11 and 12, for ruling on bail application and commencement of trial.

Sani remanded the defendants in Port Harcourt Correctional Centre and ordered that all COVID-19 protocols be maintained by the centre before admitting the suspects.

The News Agency of Nigeria (NAN) recalls that MV Elobey VI was attacked and hijacked by pirates in the early hours of March 21 at about 22 nautical miles off Port Gentil, Gabon.

The pirates forced the crew to sail to Nigerian waters, but fled when MV Elobey VI was approached by Nigerian Navy warship.

The three abducted sailors were later released on payment of ransom.

The Court of Appeal in ... Read More