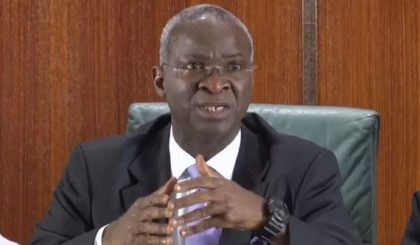 The Federal Executive Council (FEC) on Wednesday approved a variation of N3.9billion for the completion of federal secretariat projects in Anambra, Bayelsa, Nasarawa, Zamfara and Osun states.

The News Agency of Nigeria (NAN) reports that the Council also approved N1.5billion for the rehabilitation of the second phase of the Usuma Dam at Bwari, Federal Capital Territory (FCT).

The Ministers of Works and Housing, Babatunde Fashola and FCT, Muhammed Bello confirmed these developments at a briefing on the outcome of the Council meeting, presided by President Muhammadu Buhari.

Fashola stated that the secretariat projects were initially awarded in 2011 at the cost of N13.5billion, saying the approved N3.9billion variation was for all the five projects, bringing the total cost of the projects to N17.4billion.

“What we have is a memo on the public housing side of our ministry.

“We applied to Council to revise the estimates and total cost of files of 16 contracts because the cost of materials had altered significantly since 2011 when these projects started and we want to complete them and these are the federal secretariat projects in Anambra, Bayelsa, Nasarawa, Osun and Zamfara states.

“The variation was for N3.975 billion total for all the five. They are handled by different contractors, but each one wanted a variation and the total sum of variation came to N3.975 billion.

“These secretariats are necessary to enable us house federal workers in these states.

“The problem arose from the creation of new states, in assets sharing some of the old states took the whole secretariats, so our staff in those states, across all federal ministries, are either in rented official premises for their work or squatting in state government premises.

For example, my ministry has controllers in all the 36 states; Controllers for Works, Controllers for Housing. These are some of the people, apart from other ministries who have staff in those states.

Council approved this variation and the intention is to enable us complete the projects. You might recall I briefed you some time last year about an approval for the award for the furniture, so all the furniture has been complete, they are in the warehouse, so it’s just for us to complete the buildings now and install them.

On his part, the minister of the FCT, disclosed that the Council approved N1.5billion for the rehabilitation of Lower Usuma Dam Water Treatment, Plant Phase Two.

He said: “In the meeting of today, the council approved a very important infrastructure project for the city of Abuja. And that project is the rehabilitation of Lower Usuma Dam Water Treatment Plant Phase Two at the sum of N1,510,206,066.

“The scope of work entails general rehabilitation, repairs of and replacement of electro-mechanical components and laboratory restoration, rehabilitation of chemical and chlorine buildings, and general civil engineering work.

“As you know, water treatment plant is a very important infrastructure project. The contact is to rehabilitate that Treatment Plant which has been in operation for about 30 years.’’

He expressed optimism that the rehabilitation work when completed, within the next 12 months, the Water Treatment Plant would continue to provide service to FCT residents for another 30 years.(NAN)