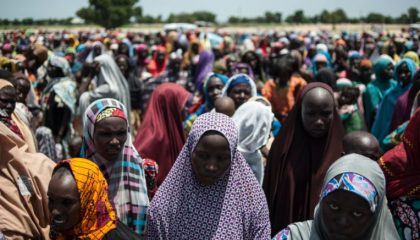 The Ministry of Humanitarian Affairs, Disaster Management and Social Development on Thursday distributed relief items to no fewer than 5,576 Internally Displaced Persons (IDPs) in Wasa Camp in Federal Capital Territory.

Its Minister, Hajiya Sadiya Umar Farouq, said the gesture was part of the celebration of World Humanitarian Day and commemoration of the one year anniversary of creation of the ministry.

“I came here to say hello and see how you are doing.

“These items would be distributed to 879 households compromising of 5, 576 IDPs in Wasa IDP camps here in the Federal Capital Territory,” Farouq said.

The News Agency of Nigeria (NAN) reports that Farouq was represented by Alhaji Grema Ali, Director, Office of the Permanent Secretary in the ministry.

The Coordinator of the camp, Mr Jeoffery Bitrus, thanked Farouq for the gesture.

He said the items would go a long way alleviating the sufferings of the IDPs.

Bitrus pleaded with the Federal Government to provide antenatal clinic for women in the camp, adding that pregnant women were experiencing challenges of getting medical services.

Mrs Hafsat Ahmad, the Women Leader in the camp, said Farouq had been of immense help to women in the camp.

She pleaded for more support for the women in form of empowerment and skills acquisition. (NAN)