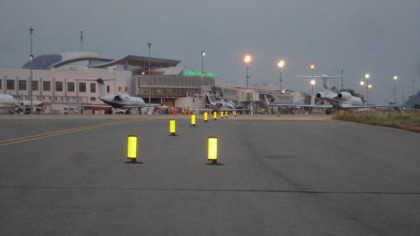 (NAN) The Chief Whip of the Senate, Orji Kalu has applauded President Muhammadu Buhari for the successful reconstruction and re-opening of Akanu Ibiam International Airport (AIIA), Enugu.
Kalu, while commending Buhari’s efforts toward infrastructural development across the country, said that the landmark projects being executed in the South East by the federal government should be applauded by Ndigbo regardless of political affiliation.
The former governor of Abia urged Igbo sons and daughters both at home and abroad, to support the federal government in its efforts to reposition Nigeria.
He stressed that the South East had witnessed robust development under President Buhari.
The News Agency of Nigeria (NAN) reports that Orji spoke in Abuja on Sunday, while hosting a cross-section of professionals of Igbo origin.

Kalu noted that President Buhari was determined to sustain investments in critical infrastructure across the country.

He added that the welfare of Nigerians remained a top priority in the policy thrust of the federal government.
“With the successful completion of the rehabilitation and upgrade of Akanu Ibiam International Airport, Enugu, the people of the South East, should appreciate the efforts of President Muhammadu Buhari in making life meaningful for Nigerians, Ndigbo inclusive.
“I recall when the airport was closed for reconstruction in 2019, some people who play politics of bitterness, were making noise that the project would be abandoned.
“Today, I am sure these political jobbers are regretting their utterances as President Buhari has demonstrated his love for Ndigbo, with the timely delivery of the newly reconstructed Enugu international airport.
“With improved facilities at the airport, the capacity of the airport has been strengthened.
“The newly rehabilitated airport, upon full resumption of local and international flights will witness large influx of passengers and commercial activities.
“The economy of the South East has been boosted with investments in key infrastructure like the newly rehabilitated Enugu International airport.
“The federal government under President Buhari has executed many projects in the South East including the Ikot Ekpene-Alaoji-Ugwuaji Switching Station, Nnamdi Azikwe Mausoleum, NSIA- Umuahia Diagnostic Centre (NUDC), upgrade of Aba-Itu- Malabar 132KV Line (82km) and  other projects.
“There are still ongoing federal government projects including the Second Niger Bridge, Enugu-Port Harcourt Expressway, Owerri-Umuahia road and others.
“The president is a friend of Ndigbo and as such he has continued to demonstrate his love for Igbo people with the landmark projects being executed in the South East.
“Anyone who says the president does not like Ndigbo is being economical with the truth.
“The president has friends across the nooks and crannies of Nigeria including the South East.
“I recall during my stint as governor, President Buhari, was our guest in Abia. During his visit, he was conferred with a chieftaincy title in my hometown, Igbere and he was equally honoured with a honorary doctorate degree by Abia State University (ABSU), Umuahia.
“The president is passionate about a united Nigeria. He is determined to ensure even development across the six geopolitical zones of the country.
“The governors of South East despite belonging to the People’s Democratic Party (PDP) and All Progressives Grand Alliance (APGA) enjoy a good working relationship with the president
.
“The governors alongside other Igbo leaders met with the president from time to time to discuss issues relating to the development of the South East zone.
“As leaders, we must put sentiments aside and work for the progress of our region and Nigeria at large.
“The time is now for Igbo sons and daughters to join the All Progressives Congress (APC) in a bid to achieve the South East of our dream, with the support of President Buhari,” the former governor of Abia said.
Kalu urged the political class in the South East, to applaud the efforts of the president in fixing infrastructure in the region, adding that the president would not be derailed from his robust agenda to reposition Nigeria.
The former governor, who took a swipe at perpartrators of hate campaign, cautioned politicians not to heat the polity ahead of the 2023 general elections, adding the APC remained united. (NAN)