Renew your commitment to end malnutrition – Aisha Buhari to stakeholders 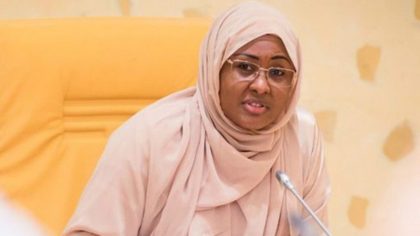 First lady of Nigeria, Dr. Mrs. Aisha Buhari has called on nutrition stakeholders to renew their commitment to end malnutrition inNigeria. She was speaking during a stakeholders meeting on nutrition at Dutse,Jigawa state on Wednesday, 7th October, 2020. Mrs. Buhari called on the stakeholders to demonstrate strong leadership, strengthen coordination and ownership and sustain the prioritization of nutrition with a view to ultimately improving the nutrition situation in the country.

With the COVID-19 global crisis, she said existing structures for championing nutrition have been sidelined;“it has therefore become more critical for nutrition actors to take and support key actions to protect the nutritionally vulnerable groups”. She said ABF was happy to provide a platform, “where we can together arrive at workable solutions to the nutritional situation we are experiencing”.

Mrs.Buhari, who was represented by Dr. Fatima Jibrilla, commended Jigawa state Government for its demonstration of political will and commitment towards ending malnutrition.

Commissioner for Women Affairs and Social Development,Hajiya Yelwa Da’u, speaking at the event, said Jigawa is a rural state, therefore aside from RUTF, it was necessary for the state to promote cheap and available alternatives. For this, she said, the state is sensitizing pregnant and lactating mothers for their buy-in. She said the state takes publicity very seriously and commended ABF for organizing the meeting as it will give added sensitization to the issue of malnutrition.

Permanent Secretary, Ministry of Health, who was represented at the event by Director Health Services, Bashir Ahmed said Jigawa state has created a budget line to supply RUTF, saying the budget is being released on time and RUTF is being procured and distributed across the state. He spoke of a special nutrition project called “Masaki”, which pushes for the production and use of locally available nutritious food products. He said the project has been implemented in all local governments and is yielding positive results. Recent findings showed that Nigeria has the second-highest burden of stunted children globally with a stunting rate of 32%. About 2 million children below the age of 5 years are at risk of an extreme form of malnutrition (Severe Acute Malnutrition). Only one in every 10 of these children has access to the lifesaving treatment they require. The Nutrition Stakeholders Meetings were organized by Aisha Buhari Foundation, alongside three other partners to advocate for increased attention and domestic investments for nutrition,

Similar stakeholder meetings have been held at Kano, Bauchi,Katsina and Gombe, which all have worrying nutritional statistics.