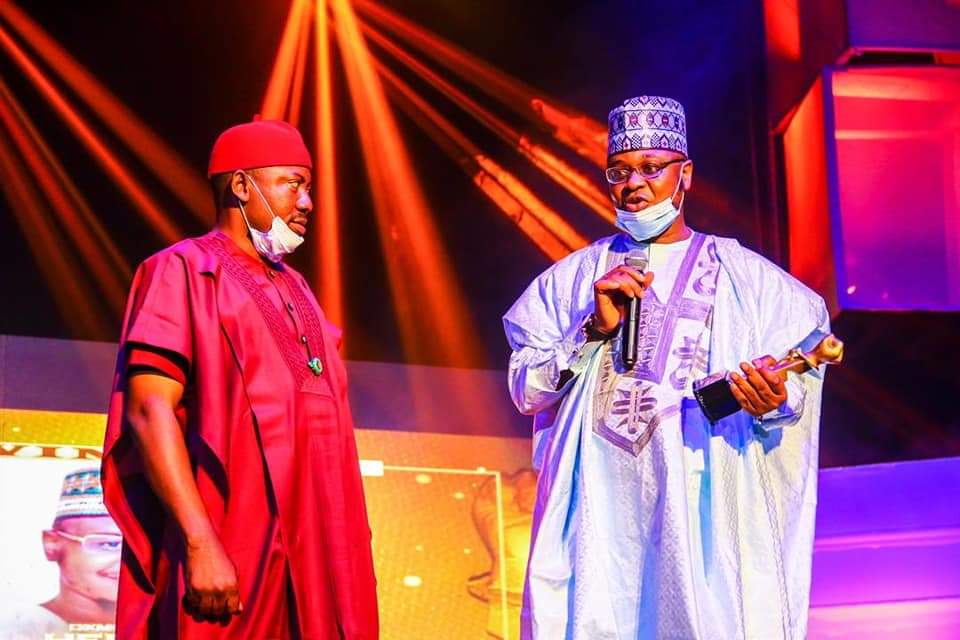 Most Promising Minister of the Year Award Goes to @DrIsaPantami

The ongoing transformation of Nigeria’s digital sector under the stewardship of the Honourable Minister of Communications and Digital Economy, Dr Isa Ali Ibrahim Pantami, which has seen the sector coming up with developmental policies such as the National Digital Economy Policy and Strategy for a Digital Nigeria, National Broadband Plan 2020 – 2025, SIM Cards registration policies, among others has not gone unnoticed as the focused, visionary and result-oriented policymaker was voted as the MOST PROMISING MINISTER of the year 2020 in an online poll conducted by the organisers of the Nigeria Heroes Awards.

It is on the record that within Dr Pantami’s one year in office, broadband penetration hits unprecedented 43.30%, the era of the use of improperly registered SIM cards was brought to an end with the deactivation of 2.4 million improperly registered SIM cards, Right of Way levy is been waived or reduced, the telecommunications sector is properly positioned to attract Foreign Direct Investment (FDI), with the Federal Government guaranteeing the protection of infrastructures.

The Pantami one year in office has also ensured COVID 19 did not affect continuity in governance with most executive functions holding virtually such as the Federal Executive Council and National Council of States meetings. Similarly, the cost of governance has been reduced as multiple projects are been commissioned virtually.

The Pantami transformation has also provided an avenue for Nigerians to acquire digital skills from the comfort of their homes, artisans, farmers, people living with disabilities are also not left out as specialized capacity development programmes are organized for them.

Pantami’s one year in office likewise protected the consumers from exploitation and also provided a listing ear.

It is no surprise His Excellency, President Muhammdu Buhari commended the performance of Dr Pantami during the commissioning of the communications and digital economy complex held on 19th March 2020.
“The development of the National Broadband Plan is in line with the objective of the Federal Government to provide broadband for Nigerians. The Plan is also expected to support our objective of deploying 4G across the country. I must commend the Honourable Minister of Communications and Digital Economy, the Nigerian Communications Commission, the Presidential Committee and all stakeholders who participated in the development of this National Broadband Plan”.

“If you will list 2 or 3 performing Ministers in this administration, the Minister, Dr Pantami is at the top. He took a Ministry that was sleeping and upgraded it to a 21st century Ministry”. Kaduna State Governor, Nasir El-Rufai.

“On Wednesday, 21st of August, 2019, he was sworn in as the minister to oversee the Ministry of Communications and Digital Economy. Some of us who followed the activities as the DG National Information Technology And Development Agency were convinced that you were going to lift the ministry from where they were to the next level. Knowing you as a thinker, a man that’s full of ideas, and a man under whose leadership National Information Technology Agency came up prominently to the fore.” Imo State governor, Hope Uzodinma.

“We thank God that he gave us you as our son, and we thank him for giving you all that it takes to take this ministry to this level that it is today. And I believe, I have the belief that we are yet to reach the next level. For us, we know your capacity, we know your ability and we know the courage and the doggedness that’s inbuilt in you since from childhood, that made Mr President identify you as one of those that can add value to this government.” Gombe State Governor, Muhammdu Inuwa Yahya.

“It is a pleasure I call this to be in the company of the Honourable Minister of Communications and Digital Economy because no matter how small the time is, you will learn from him, you will learn from his wisdom. When I started as a governor, I believe one doesn’t have to blow his trumpet, well he has just given me the answer. He said you blow your trumpet, you do all these things to be accountable to your people, and we will start blowing our trumpets”. Jigawa State Governor, Mohammed Badaru Abubakar.