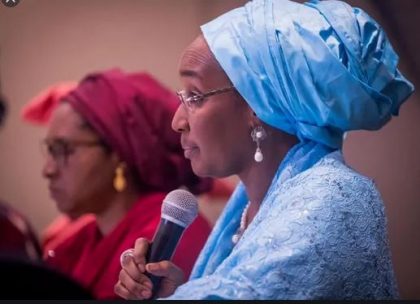 She disclosed this at the launch of the special grant distribution held in Government House Plateau States to mark the International Day of Rural Women.

According to the Minister,” we are also here to flag-off the Grant for the Rural Women programme which was introduced to sustain the social inclusion agenda of President Muhammadu Buhari’s Administration, including the realization of the national aspiration of lifting 100 million Nigerians out of poverty in 10 years. It is designed to provide a one-off grant to some of the poorest and most vulnerable women in rural Nigeria. A grant of N20,000.00 will be disbursed to over 150,000 poor rural women across the 36 States of the Federation and the Federal Capital Territory”.

“Since the inception of President Muhammadu Buhari’s Administration in 2015, Government has been paying more attention to protecting and promoting the plight of the poor and vulnerable in the country”.

She also presented assorted grains from the National Food Reserve, approved by His Excellency, President Muhammadu Buhari GCFR as palliative for distribution to vulnerable persons affected by the impact of the spread of COVID-19 pandemic.

The Minister said that “we all know that the outbreak of the pandemic brought about changes and challenges to our normal ways of living. Most obvious of this is on the vulnerable persons that depend largely on others for their daily survival. Such persons are the aged, people living with disabilities and Persons of Concerns that deserve support in terms of basic necessities including foods. The food items presented to the state were Maize 1,006.23 Metric tons (about 34 trailer load), Sorghum 1,051.63 Metric tons (35 trailer load), Millet 126.80 Metric tons (4 trailer load). The food items are meant to cater for 294,199 households”.

“It is our hope that the beneficiaries of this programme will make good use of the opportunity to increase their income, enhance their food security, and generally contribute towards improving their living standard. We believed with the complementary effort of His Excellency, Right Honourable Simon Bako Lalong, the Executive Governor of Plateau State, the targeted beneficiaries will be on their way out of poverty to prosperity”.

Earlier, Governor Bako Lalong, expressed gratitude on the visit of the Minister to the state. He said “this occasion is unique because it features the disbursement of cash transfer to 500 rural women to mark the International Day for Rural Women. I am delighted to note that 3005 pregnant and lactating women are currently receiving an additional five thousand naira as top up of the Conditional Cash Transfer”.

He noted that 26,004 vulnerable households in Plateau were already receiving the Cash Transfer of N10,000 by-monthly, 47,000 others await payment.

He said the state has 231,870 households on the state Social Register with 877,301 individual households

The Governor appealed for more social intervention for the State assuring the citizens of the state that this administration will continue to pay attention to human capital development as part of its rescue agenda.