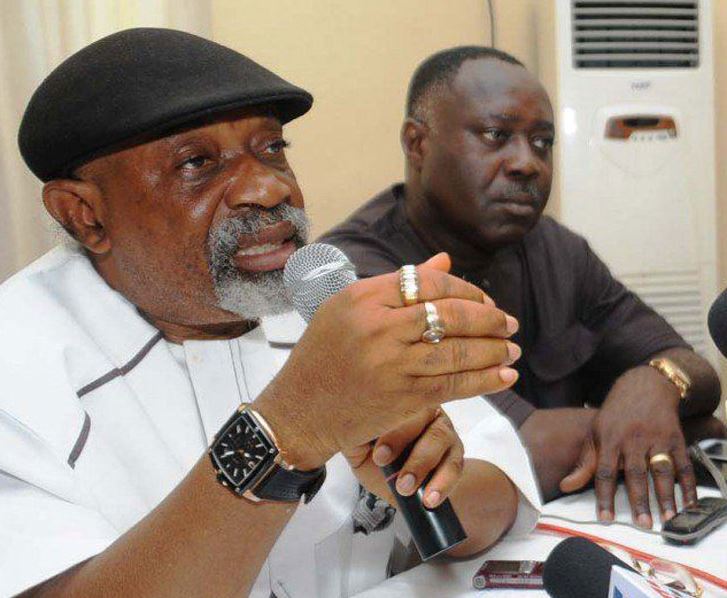 Sen. Chris Ngige Media Office has dismissed as baseless and dishonest, the statement by the University of Jos Chapter of the Academic Staff Union of Universities (ASUU) led by one Dr. Maigoro, that the Hon. Minister for Labour and Employment, Sen. Chris Ngige is responsible for the prolonged nationwide strike by the Union. In a statement in Abuja, the office said “it is rather ASUU which has bluntly refused to reciprocate the Federal Government offers by refusing to either teach, conduct researches or engage in other academic values for which they are paid, that should be held responsible.

“Strangely, ASUU claims ‘patriotism’ as basis for this prolonged industrial action, forcing every patriot to raise concern over this weird definition of patriotism by ASUU officials.

“Living by its words, the Federal Government has fulfilled all the demands over which ASUU went on strike on March 9, 2020.

“The visitation panels to the universities have been approved by the President and will swing into action once the universities re-open. The office of the Attorney General of the Federation on the other hand is also rounding off the gazetting of the panels while the National Universities has Commission has received the approved list which will be published later next week.

“Also, the revival of the Renegotiation Committee for the 2009 ASSU/FG Agreement demanded by ASUU has been set up by the Ministry of Education with Prof Munzali as Chairman, replacing the ex-chairman, Dr. Wale Babalakin (SAN) the new committee is currently meeting.

“Similarly, government has also acceded to a hybrid payment platform which is not hundred percent IPPIS for the payment of salaries and Earned Academic Allowances/ Earned Allowances, pending the result and conclusion of the integrity and usability test on the University Transparency and Accountability Solutions (UTAS) by the National Information and Technology Development Agency (NITDA).

“Besides, government has also processed for payment, the sum of N70 billion, comprising N40b for Earned Academic Allowances / Earned Allowances and N30b for revitalization of the universities. The Accountant General of the Federation at present awaits the accounts details from the federal Ministry of Education and the National University Commission for the remittance.

“Of note is that even while ASUU was on strike during the COVID-19 lockdown, government on the insistence of the Hon. Minister of labour and Employment, and out of compassion, paid them February, March, April, May and June salaries to cushion the effects of the Covid-19 on them and their families and further made every entreaty to them to come on board virtual negotiations, with a view for an early call-off of strike, to enable students benefit from virtual/online classes, fashionable at the time, and even now, all over the universal academic community, but ASUU bluntly refused . Hence, no conciliation took place for four solid months till later in October 2020. But it was the same time that pre-emptive meetings were held with National Association of Resident Doctors (NARD) and Joint Health Sector Unions (JOHESU) by the Hon. Minister of Labour and Employment to fashion out the Covid-19 Special Hazard/Inducement allowances for frontline health workers.

“Moreover, government has offset the shortfall in salaries payment to the staff of the Federal University of Technology, Akure and has set in motion through the National University Commission (NUC) and the Ministry of Education, the amendment of the NUC Act to stem the proliferation of state universities which is part of the key demands made by ASUU.

“Indeed, the meeting noted that the Hon Minister of Labour and Employment had consulted with the Hon Minister of Education on getting a waiver on the issue of No Work, No Pay as stipulated in Sec. 43 of the Trade Dispute Act, Cap T8, Laws of the Federation of Nigeria (LFN) 2004 but a reservation has been made concerning this request because of the continued ongoing strike by ASUU. The HML&E therefore agreed to work on this to be actualized before Wednesday, December 9, 2020.”

“Why then does ASUU grow deliberate amnesia over this clause in the understanding that all parties agreed to?

“What the Federal Government expects of ASUU is to return to work while the relevant Ministries of Labour and Employment, Education and Finance work on the memo for the settlement of the outstanding salaries of July, August, September and October 2020, after all, the same government paid February-June salaries even while ASUU locked out students from the classrooms.

“It is therefore preposterous for the University of Jos chapter of ASUU under Dr. Maigoro to refer to this concrete steps taken by the Federal Government as a “promissory note” with which Nigerians shouldn’t expect ASUU to call off the strike. Scholars and academics are exemplified by thoughts purified by furnace of empiricist reasoning and not by jaundiced, warped and shallow rationalizations, made worse by base media brickbats arising from subjective convictions.

“To make matters worse, he delved into propaganda to call Senator Ngige who all Nigerians know for his straight talk and integrity a “liar” – an action which makes him a pseudo intellectual and uncultured fellow who has not allowed the civilization in the ivory towers to pass through his corpus.

“How for instance does the N70b already processed for Earned Academic Allowances/Earned Allowances and revitalization look promissory when the Accountant General of the Federation has written twice to the Executive Secretary of the NUC to advise on account and mode of payment?

“How does government bending backwards to reconsider the plight of strikers, and stepping aside No Work, No pay as contained in Sec. 43 of the Trade Dispute Act, Cap T8, Laws of the Federation of Nigeria (LFN) 2004 to pay the salaries of University teachers who refused to teach for nine months look absurd? ASUU members are not above the law of the land, more so when some of them are law teachers and industrial relations experts and are therefore expected to know better.

“Need therefore for students, parents and all Nigerians to evaluate the insouciance and so called patriotism of ASUU against the determined efforts of the Federal Government towards the re-opening of the universities.”