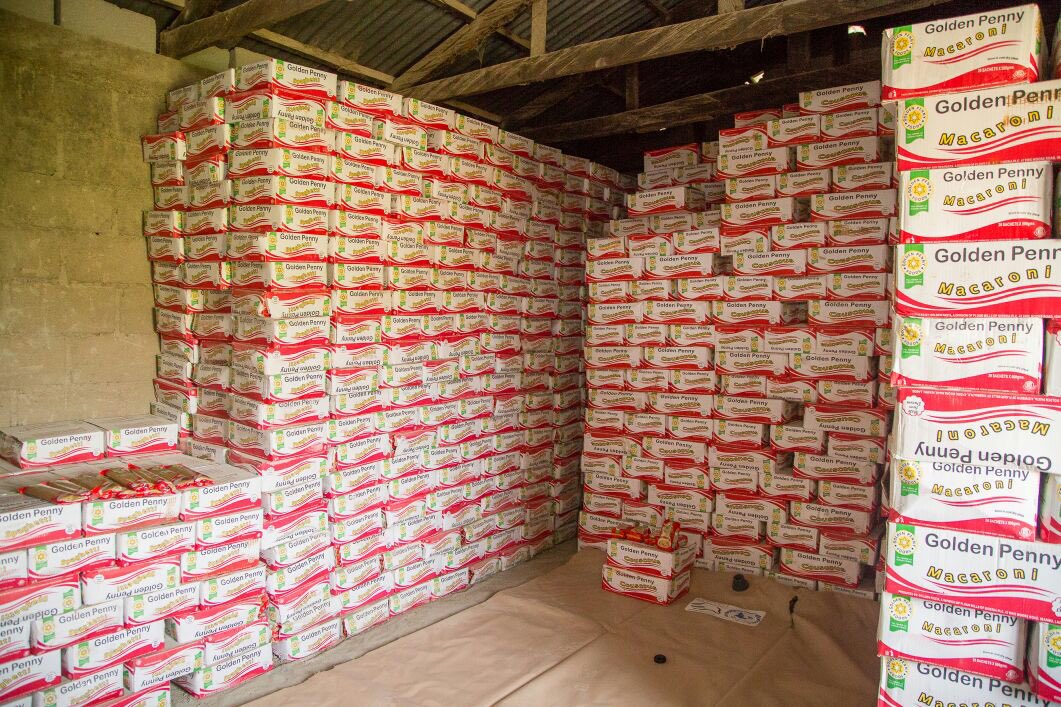 Over three thousand,eighty women in the eleven local government areas of Gombe State will benefit from the State and federal government intervention through the JEWEL CARE FOUNDATION of the first lady , Asma’u Muhammad Inuwa Yahaya. The governor’s wife disclosed this at the flagging – off of the distribution of food and non food items to women and vulnerable children in the three senatorial districts comprising Gombe north, south and central respectively.
In her address at the three local government areas visited,the governor’s wife stated that,the need to provide such support to women,orphans and vulnerable in the society became necessary in view of the current economic hardship people are facing accompanied by COVID-19 pandemic .
” I believe that by providing this items to women, the entire family benefits from it because as wives and mothers, they are better managers of homes and this will surely lessen the burden on men who do most of the purchase ” Hajiya Asma’u added that, this is just a tip of the iceberg because the State government and her foundation, the JEWEL CARE FOUNDATION will continue with this gesture to ameliorate the sufferings of the citizens.
While thanking the North East Development commission and the federal ministry of women affairs for making the occasion possible through their donations, the governor’s wife strongly emphasized that items provided are not to be sold or diverted but to reach the deserving people.
Earlier in her welcome address, the commissioner of women affairs and social development, Naomi J.Awak represented by director women, Mrs. Fibi Yusuf called on women to rally round the first lady and Gombe State government for taking issues concerning women ,youths and children very serious and close to their hearts.
They chairman board of trustees, JEWEL CARE FOUNDATION, Hamisu S. Saulawa and the state coordinator, North East Development commission, Rufai Lawan Baba Manu enumerated the responsibilities of their various offices especially in the providing of succor to the less privileged and vulnerable in the society. They therefore assured more collaboration with development partners to come up with good programme initiatives to improve and better the lots of the citizenry.
Host chairmen representing the three senatorial districts, Ibrahim Shildu of Fumakaye, Garba Umar of Balanga and Shuaibu Umar Galadima of Yamaltu Deba local government areas commended the good gesture of the first lady and the commitment of Gombe State governor Muhammadu Inuwa Yahaya in their efforts to reduce the hardships people are facing in terms of hunger and poverty. They also assured their unflinching support and loyalty to the APC government in the State.
The royal fathers,emirs of Funakaye, Mohammed Kwairanga Abubakar and Deba , Ahmed Usman QS as well as Bala waja, Muhammad Danjuma Muhammad thanked the first lady for an initiative they are very proud to reckon with.
The governor’s wife was accompanied by the wives of the Deputy governor, SSG, PPS,COMMISSIONERS, CHAIRMEN. APC STATE AND LOCAL GOVERNMENT WOMEN AND YOUTHS LEADERS,PARTY STALWARTS among others.
Items distributed are rice , sugar, pasta, gari, tomato paste, wrappers,mats and blankets worth millions of naira.
Bintu Aliyu Sunmonu