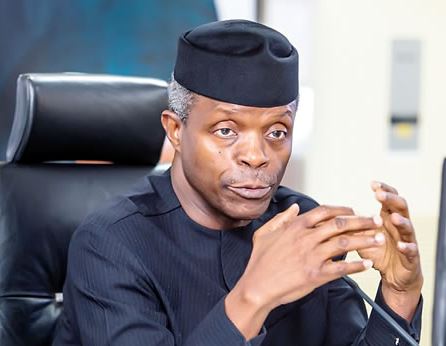 The presidency says 200,000 more Nigerians have benefited from the Economic Sustainability Plan(ESP)’s Payroll Support for Micro Small and Medium Enterprises(MSMEs).

Laolu Akande, Senior Special Assistant to the President on Media and Publicity, Office of the Vice President, in a statement in Abuja, said the addition brought the total beneficiaries so far under the Payroll Support Scheme nationwide to 465,820.

Vice President Yemi Osinbajo is the Chairman of the Economic Sustainability Committee in the Presidency.

This follows the approval of the Steering Committee of the MSME’s Survival Fund for the payment to successful beneficiaries of the Payroll Support and General MSME Grant tracks.

“Specifically for this round, over N13 billion has been made available for the Payroll Support track and over N2 billion for the General MSME Grant respectively.

“For the Payroll Support track, where beneficiaries are supported with a N30,000 or N50,000 grant per month for a period of three months, 146,065 successful beneficiaries from 28 States have started receiving payment of the sum of N30,000 each.

“Each beneficiary under this batch of payment will receive the payment of N90,000 as three-months’ salary support directly from the Federal Government.

“This brings a total of 465,820 beneficiaries so far under the Payroll support scheme nationwide.’’

Similarly, under the General MSME Grants track, 46,117 successful beneficiaries in the Federal Capital Territory (FCT) and 36 States have started receiving payment for the one-off grant of N50,000 each.

This total makes up 50 percent of the required disbursement per state.

Another batch that completes the target is forthcoming.

The total number of beneficiaries in this track is 100,000 spread across the States.

The one-off grant of N50,000 will be given to each qualified MSME as direct cash injection into their enterprise.

The MSME Survival Fund, a component under the ESP is designed to support vulnerable Micro Small and Medium Enterprises (MSMEs) in meeting their payroll obligations and safeguard jobs in the MSMEs sector.

The scheme is estimated to save not less than 1.3 million jobs across the country and specifically impact over 35,000 individuals per state.

The ESP was approved by President Muhammadu Buhari on June 24, 2020, as a N2.3 trillion stimulus plan to mitigate the socio-economic effects of the COVID-19 pandemic on Nigerians.

The plan was developed by the Economic Sustainability Committee chaired by Vice President Yemi Osinbajo, who the president also asked to lead its implementation.