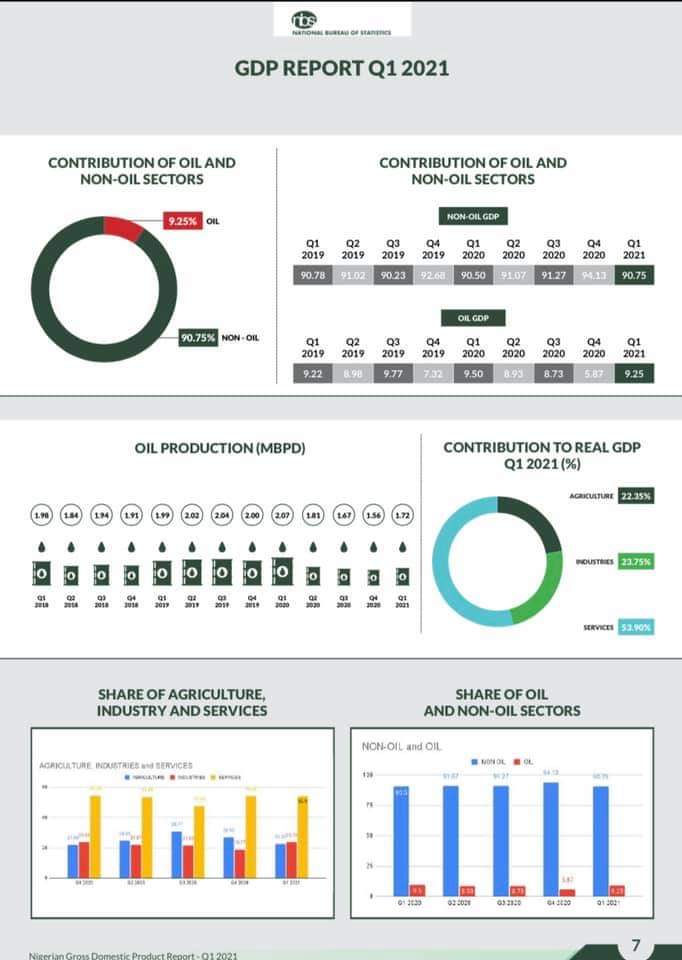 In spite of several challenges caused by low oil prices and the second wave of the Covid-19 pandemic, Nigeria’s economy is finally out of the woods and has exited recession as Gross Domestic Product (GDP) rose by 0.51 percent in the first quarter of 2021.

This is contained in a report by the National Bureau of Statistics (NBS) on Sunday in its GDP report for the first quarter 2021.

Considering the GDP projection for the Nigerian Economy, recall that Mrs. Zainab Ahmed, Honourable Minister of Finance, Budget and National Planning, had said: “By 2021, the economy will recover from recession, and it is the sustained implementation of good fiscal policies, the monetary policies and the economic sustainability plan by President Muhammadu Buhari that led to the country’s exit from the recession.

She also said that the quick exit showed that government’s economic diversification efforts were yielding positive outcomes. According to her, some activities in the country have shown resilience, recording strong positive growth.

Reacting to the development, foremost economic expert, Professor Uche Uwaleke, said the Q1 2021 GDP report reflects an economy already on the path of gradual economic recovery with a positive real GDP growth rate following that recorded in the previous quarter.

He said in a statement on Sunday that although still weak at 0.51percent, it is interesting to note that the manufacturing sector is now out of the negative territory increasing from -1.51 percent to 3.40 percent.

According to him what was “equally noteworthy is the moderation in the negative performance in sectors like trade, accommodation and education.”
“The increase recorded in the health sector from 3.05 percent in Q4 of 2020 to 4.65 percent clearly shows that the country is winning the war against the COVID’19 pandemic.“ It is clear that the improved performance in the oil sector relative to the previous quarter was largely on account of improvement in average crude oil production.

“But the report also reveals disturbing pattern in the real GDP growth rate. Declines were recorded in critical sectors of the economy such as agriculture, ICT, real estate and transportation. This may not be unconnected with the rising insecurity in the country.

“That the non-oil sector dropped should be of concern to both the fiscal and monetary authorities,” Uwaleke added.

“Nigeria’s GDP grew by 0.51 percent (year-on-year) in real terms in the first quarter of 2021, marking two consecutive quarters of growth following the negative growth rates recorded in the second and third quarters of 2020,” the report reads.

“In the quarter under review, aggregate GDP stood at N40,014,482.74 million in nominal terms. This performance is higher when compared to the first quarter of 2020 which recorded aggregate GDP of N35,647,406.08 million, indicating a year-on-year nominal growth rate of 12.25 percent.

However, the figure was higher than the production volume of 1.56mbpd recorded in the fourth quarter of 2020.

Meanwhile, performance in the non-oil sector declined when compared to previous figures.

“Growth in the non-oil sector was driven mainly by the information and communication (telecommunication) sector, while other drivers include agriculture (crop production); manufacturing (food, beverage and tobacco); real estate; construction and human health and social services.”

NEWER POSTSaudi King, Secretary General of Anglican Communion Condole with President Buhari on Loss of COAS
OLDER POSTNational Flag to Fly at Half Mast in Honour of COAS, Others – President Buhari