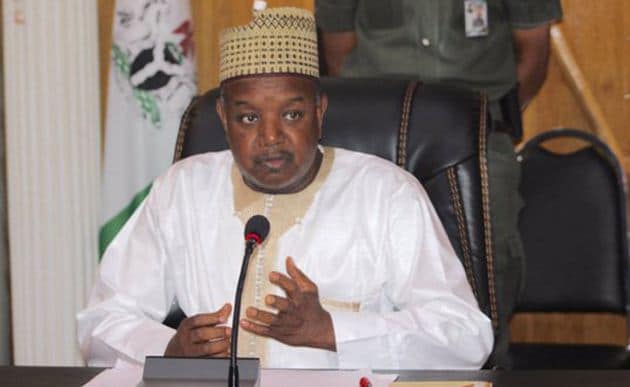 The Federal and Kebbi Governments are working together to effectively tackle banditry and other forms of criminality across the state.
Gov. Atiku Bagudu made this known when he paid a sympathy and condolence visit to Dankolo community in Danko Wasagu Local Government Area of the state, which recently came under attack by bandits.
Bagudu, who is also the Chairman, Progressive Governors’ Forum said the collaboration was geared towards restoring normalcy in Dankolo community, other parts of the state and Nigeria in general.
Bagudu lamented that the dastardly act resulted in the unfortunate deaths of a DPO and some security personnel in the area.
”These plausible measures will remain anonymous for now but be rest assured that, we will leave no stone upturned to guarantee the safety of all law abiding citizens
“Peace will Insha-Allahu be restored here and all parts of Kebbi very soon. We must all play our roles this noble course.
“I must, therefore, commend President Muhammadu Buhari, security agencies, our vigilante, traditional and religious leaders as well as all other critical stakeholders.
”The state government will do the needful for all the communities in the area to return and sleep with their two eyes closed,” he said.
Bagudu noted with satisfaction that farmers were already planting in their farms, yet, depicting the gradual return of peace, while urging them to remain steadfast, resilient and fervently prayerful.
The governor added that the visit was aimed at rebuilding the confidence of the residents of the area and other parts of the state .
He assured the residents that he would ensure deployment of additional security in the area to safeguard lives and property.
The governor also assured that the contractor handling the road project linking the community with other parts of the state was not being owed a Kobo.
“The work is happily progressing and Insha-Allahu, it will be completed for the common good of all especially the targeted communities,” Bagudu promised .
Earlier, Sen. Bala Ibn Na-Allah, representing Kebbi South Senatorial District told the Dankolo community about the untiring efforts of the governor to ensure peace returns to the area.
He equally said that President Buhari and the federal legislators would not rest until the security challenges in the area and Nigeria in general come to an end .
Some of residents expressed happiness and thanked the governor for the sympathy visit during the Eid al-Fitr celebrations.
Alhaji Ibrahim Sawani , Dagacin Alale, a community leader and the Councillor representing Dankolo ward Shuaibu Marafa appreciated the concern shown by the governor towards alleviating their plight.
They said the measure put in place by the governor was yielding positive results as normalcy was gradually returning to the area and those who fled have started returning to their homes.
After leaving Dankolo village, the governor with his entourage were also at the Palace of Chiefdom of Sakaba, Alhaji Muhammad Ladan-Musa where he reassured the people of the area of government and security agencies’ commitment to address the security challenges in the area.
He appealed for understanding and cooperation from people by joining hands with their leaders and security agencies to deal with the situation.
In his remarks, the Chief of Sakaba, Alhaji Muhammad Ladan Musa thanked the governor for the visit.
He described the governor as a leader full of compassion for his people: “We are indeed happy with the visit at this period of Eid-el-Fitr.
”This simply demonstrates the kind of leader you are. I have no words to express my thanks to you,” he said.
The traditional leader appealed to the governor to implore the contractor to hasten the completion of the ongoing road project in the area.
The governor and his entourage also visited the Divisional Police Command in Sakaba Local Government to commiserate with the Police over the killing of a Divisional Police Officer of Sakaba, SP Abdullahi Jimoh, as well as Insp Ibrahim Aliyu and seven other policemen, who lost their lives as a result of an attack by bandits recently. (NAN)