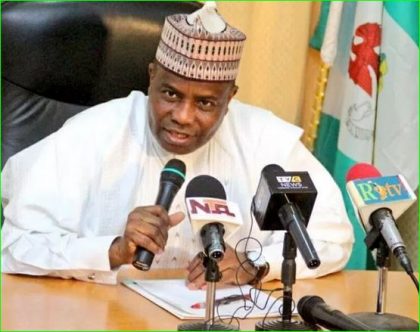 The Sokoto State Governor, Rt. Hon. Aminu Waziri Tambuwal, has donated fourty million naira to the families of the victims who died in a boat mishap in Warrah, Ngaski Local Government of Kebbi State, recently.
Tambuwal announced the donation while on a condolence and sympathy visit to his Kebbi State counterpart, Senator Abubakar Atiku Bagudu, at Government House, Birnin Kebbi, on Saturday.
The Sokoto State Governor said he was in Kebbi State to condole and sympathise with the Government and people of Kebbi State, especially the people of Yauri Emirate, over the unfortunate boat accident which led to the sad loss of many lives .
‘ We are here to commiserate and condole with you on the loss of lives of our brothers and sisters that were involved in the boat mishap that happened few days ago in Yauri Emirate.
” It is indeed a very unfortunate and sad incident and we pray that, God shall forgive these people who have lost their lives and may He admit them into Aljannat Firdaus,” he prayed.
He said:” Please accept the condolences and commiseration of the Government and people of Sokoto State.
‘” On this note, the Government and people of Sokoto State will support the victims of the incident with a token of Fourty million naira .”
The Governor also condoled with his Kebbi State counterpart on those who have lost their lives due to activities of the bandits in the state.
While lamenting the obnoxious criminal activities of bandits in the zone, he appealed to the people to support and cooperate with the government of Kebbi State, in its determination to overcome the recurring security challenges in the state.
In his response, the Kebbi State Governor, Senator Abubakar Atiku Bagudu, thanked and immensely appreciated Tambuwal for the condolence visit, describing him as a reliable brother.
Bagudu, while appreciating the donation of Fourty million naira from Sokoto State Government, further described it as a kind and immeasurable gesture to the victims of the incident.
He averred:” You have announced the donation of Fourty million naira to the victims, we can’t thank you enough, Your Excellency .
” We know that it is not even the quantum, but, the spirit of giving that is in your heart towards our people.
He elatedly extolled the long lasting bond of cordial relationship between Sokoto and Kebbi States, in the period of joy and sadness.
Bagudu also acknowledged and commended Tambuwal in his quest to further develop Sokoto State.
‘” We are proud of your tangible achievements, what you are doing, your legacies, we pray that, God will continue to honor you, uplift you and may He reward you abundantly, ” he said.
The Sokoto State Governor, Rt Hon Aminu Waziri Tambuwal was accompanied on the visit by the Speaker and Deputy Speaker, Sokoto House of Assembly, SSG, Chief Judge and Grand Khadi,among others Commissioners.
Meanwhile,while updating the Sokoto State Governor on the latest figures of the victims who lost their lives, Bagudu said that, 81 dead bodies had so far been recovered as at Saturday, with 59 of them from Warrah, while 22 were rescued alive.
According to him , the exact number of the passengers in the boat was not known, even as averred,” however, some of the survivors said that, the ill-fated boat was carrying over a 150 passengers which started its journey from Lokon Mina, in Niger State to Warrah, Kebbi State.”
Kebbi State Govt