Governor Abubakar Sani Bello of Niger State
Say the development of critical infrastructure is cardinal to the regeneration of the state economy, as a way of attracting investors to the state.

Governor Sani Bello stated this at the commissioning of the 2.4km Broadcasting Dual Carriageway in Minna and 7.5MVA injection sub-station, Paiko.

He said since the inception of his administration, provision of infrastructure has remained one of his priorities and will continue to provide infrastructures that have direct bearing on the people as well as stimulate economic growth in the state. 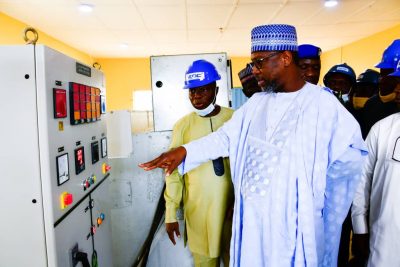 The Governor disclosed that the Broadcasting Road was constructed at the cost of over N1.3b, adding that the road would open up new areas, ease vehicular movement, reduce accidents, beautify the environment and afford people opportunities to increase socio-economic activities in the area.

“For us to attract investments into the state, we need to have good infrastructural system in place that guarantees access to the market and other factors of production”, he said.

The governor revealed that his administration has constructed over 40 civil engineering projects, 80 mechanical/electrical projects, while 30 public buildings have been built across the state among other projects.

He reaffirmed that despite the daunting economy and security challenge, the state government will continue to provide dividends of democracy to the people.

“Let me assure Nigerlites, that this government will sustain the momentum of delivering projects that have direct bearing on daily activities of the people”, he said.

According to the governor, most projects started from the beginning of this government in 2015 with most of them completed and already been put to use, while others are still ongoing.

Speaker, Niger State House of Assembly, Abdullahi Bawa acknowledged that the project being commissioned has demonstrated that the governor is on the right direction and appreciated the good working relationship existing between the executive and legislative arm of government

Earlier on, Commissioner for Works and Infrastructural Development, Mamman Musa said the Broadcasting Dual Carriageway was constructed under the N25b SUKUK private bond programme captured in 2019 and 2020 appropriation laws.

According to him, the project include; payments of compensation and relocation of utilities such as water Mine’s and electricity installations.

“The scope of the project include; milling of existing bituminous surface, concrete works in median, side drains, laterite in sub-base, crushed stone base and asphalt is concrete binder and finishing,” he said.

Musa said that the administration initiated 299 projects with 165 completed explaining that Minna has 12 new roads already in use.