Fulani Herdsmen Are Not Under Attack Or Being Chased Out Of Ebonyi State, Alhaji Adamu Peacefully And Willingly Relocated From Ebonyi State To Taraba State.”

The attention of the Ebonyi State Police Command has been drawn to a distorted and misleading video in circulation on social media platform that Fulani Herdsmen were being attacked and chased out of Ebonyi State by faceless group. 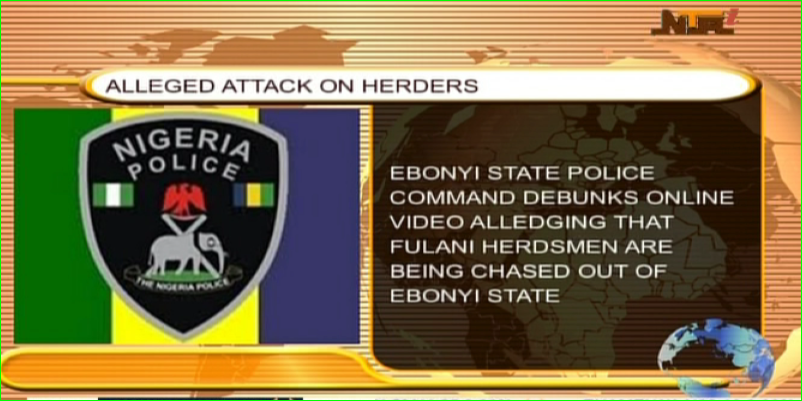 To set the record straight, the Command wishes to state that on the 2nd of January, 2021 one Fulani herdsman Alhaji Adamu residing at Ozibo village in Nkaleke Ichaba/Enyibishiri Community in Ebonyi L.G.A of Ebonyi State decided to relocate with some members of his family to Taraba State in-search of greener pastures for his Cows as the dry season is setting in. Alhaji Adamu also informed the village chairman and Ichaba Development Centre Coordinator before his peaceful and Voluntary relocation.

For the avoidance of doubt Alhaji Adamu left seven other members of his family (Alhaji Musa Danfo and six others) who are still residing at the same settlement with some of their cattle.

Therefore, the Command wishes to re-emphasize that before this video the Command have no record of threat to the live of the peace loving herders or their Cows, neither to those residing in the said Camp or in the entire State.

It may also interest the Public to know that the Fulani community yesterday being 2/01/2020 paid Christmas and New Year visit to His Excellency, the Executive Governor of Ebonyi State and nothing of such threat was reported.

However, the mischief makers and the enemies of the State made a voice record over the video to create panic, mislead the public and misrepresent the peaceful coexistence of the Herders and their host communities in Ebonyi State.

The Command therefore urges the general public to regard the video as fake, baseless and mischievous and go about their lawful businesses.

Meanwhile, the Commissioner of Police Ebonyi State, CP Philip Sule  Maku psc, fdc, has ordered full scale investigation into the matter with a view to arresting those behind the fake video for possible prosecution.

The CP is also reassuring the general public particularly the Fulani Herdsmen and their host Communities in Ebonyi State of the Command’s continuous commitment to ensure the safety and security of their lives and properties.