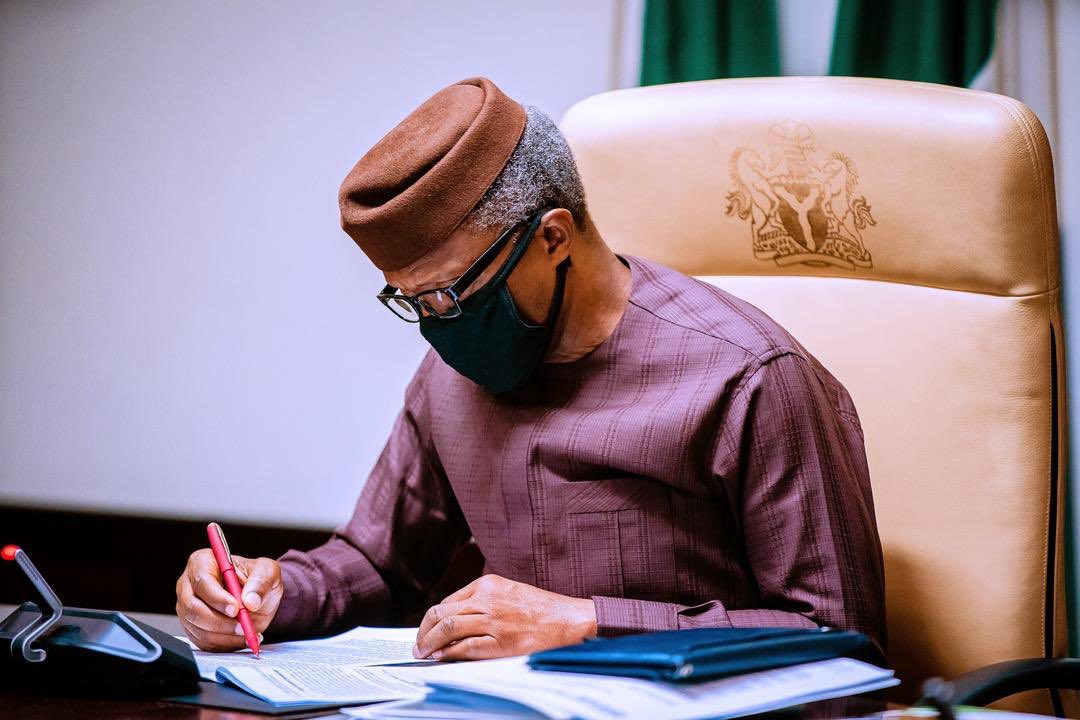 Following the successful activation of the Economic Sustainability Plan’s (ESP) Cash Transfer scheme aimed at delivering financial support to at least 1 million urban-based households using technology, the Buhari administration’s vision of reducing extreme poverty by lifting at least 20 million Nigerians out of poverty in the next two years is now within reach, according to Vice President Yemi Osinbajo, SAN.

Prof. Osinbajo stated this Tuesday in Abuja while flagging-off, virtually, the cash transfer scheme to be facilitated through a wholly technology-based approach called the Rapid Response Register (RRR).

RRR is the means by which urban poor and vulnerable population can be speedily identified using geographic satellite technology and other related means for the purposes of delivering cash to households affected by the fallouts of the COVID-19 pandemic in the country.

According to the Vice President “the groundbreaking success of the RRR, now emboldens us to achieve our aspiration of a social security programme for a minimum of twenty million Nigerians in the next two years. This will be the largest of its kind on the continent. This (aspiration) is, at least from the perspective of this tested approach, now well within our reach.”

“The only constraint, of course, is the funding which we must look for because, this country deserves a social security scheme that will not merely alleviate poverty but also create wealth for the millions of those who are waiting for this opportunity.

“Our government launched the National Social Protection Policy (NSPP) in 2017 to provide the framework for institutionalizing the work we started since 2016 on reducing extreme poverty in Nigeria, based on our administration’s vision to create a comprehensive social security programme for the poor and vulnerable and thereafter the pledge to lift 100 million Nigerian’s out of poverty in ten years.”

The Vice President maintained that the launch of the (RRR) social protection method of targeting, which is the first strategy to be developed and tested in the Sub-Saharan Africa region, would enable Nigeria tackle poverty in a more systematic manner, leveraging technology to expand the scope of the interventions.

His words: “As of 31st December 2020, we have identified and registered about 24.3 million poor and vulnerable individuals into the National Social Register; equivalent to about 5.7 million households. Through this project, we are currently injecting about N10 Billion directly into the hands of about 2 million poor and vulnerable people every month.

“This is about the largest evidence-based effort by any administration on poverty reduction and its impact on the lives of the poor is huge; by way of improving the livelihoods of the beneficiaries through enhanced household purchasing power; smoothening consumption; increasing savings and acquisition of household assets; and improving the local economy. There are many more ramifications.”

Earlier in her remarks, the Minister of Humanitarian Affairs, Disaster Management and Social Development, Hajiya Sadiya Farouq said the initiative would provide a gateway to other important government programmes, adding that Nigeria now has a database for impact tracking and the expansion of social interventions and related programmes, in line with President Muhammadu Buhari’s vision of extending financial support to more Nigerians.

She said “By design, this register links to other databases such as banking information of respondents and national identity numbers. It is also a process that is advanced in unifying national databank towards the delivery of social development in Nigeria. There is no doubt that in future, as has been demonstrated in the previous presentation, we would be reverting to the process used here and the register itself, to aid emergency assistance”.

On his part, the World Bank Country Director for Nigeria, Mr Subham Chaudhuri commended the Federal Government for the initiative, noting it as a critical component in the country’s response to the COVID-19 pandemic. While pledging the support of the World Bank for the project, Mr Chaudhuri emphasized the need for stakeholders to remain transparent in the selection and disbursement of the funds to the beneficiaries.

About 3,115 households received alerts of payments instantly at the flag-off of the project by the Vice President. A total of 1 million households would be impacted directly under the scheme in the next 6 months. Each household already identified will receive N5000 cash transfer from January to June this year.

The Cash Transfer scheme which is part of the ESP is designed to build a shock responsive framework for capturing and registering the urban poor and vulnerable populations across Nigeria. The RRR focuses mainly on the urban poor wards selected using scientifically validated methods of satellite remote sensing technology, machine learning algorithm and big data analysis.

Also present at the event include the Minister of Labour and Employment, Sen. Chris Ngige; the representative of the European Union (EU) mission in Nigeria, Mr Ketil Karlsen, among others.