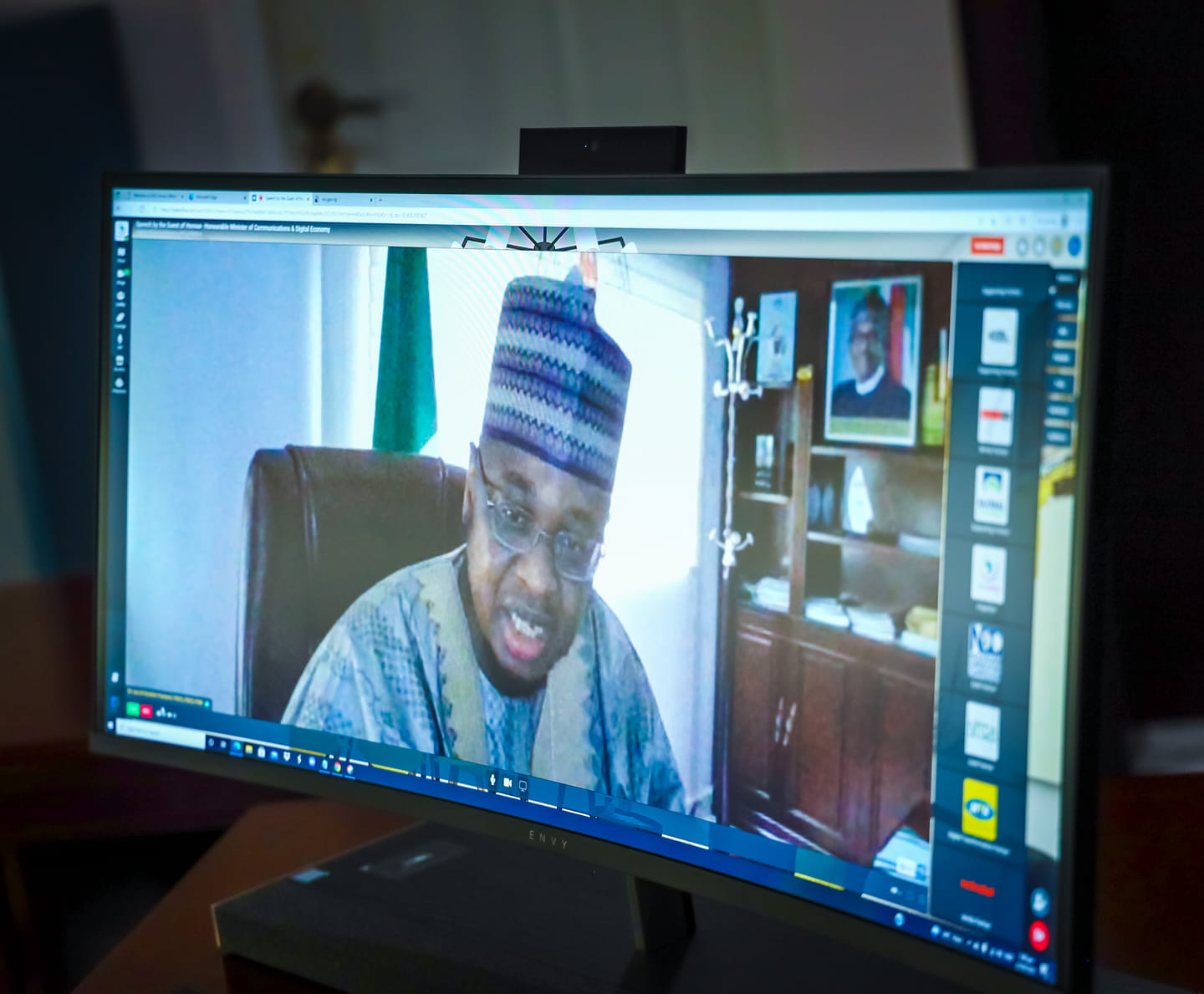 May Peace, Mercy and Blessings be upon you!

I am delighted to be here today at the 9th edition of the Digital Africa Conference and Exhibition. I wish to thank the Chairman of the Digital Africa Team for the invitation to participate in this Conference. The consistency with which you have organised this event attests to your commitment towards accelerating the development of Africa’s technology ecosystem.

Globally, emerging technologies are disrupting industries and the way we solve problems, forming the primary vehicle for our daily activities. Technologies such as the internet of things (IoT), robotics, 3D printing, blockchain and artificial intelligence have the potential to act as impact amplifiers, challenging traditional approaches of going about ‘age-old problems in sectors such as agriculture, financial services, healthcare, education, water, and energy. These technologies offer a chance to unlock new pathways for rapid economic growth, innovation, job creation and access to services that would have been unimaginable only a decade ago.

Artificial intelligence (AI) is a term used to describe machines performing human-like cognitive processes such as learning, understanding, reasoning and interacting. It can take many forms, including technical infrastructure (i.e. algorithms), a part of a (production) process, or an end-user product.

Artificial intelligence plays an increasingly important role in our lives and economy and is already having an impact on our world in many different ways. Today, smartphone smart assistants, such as Siri or Cortana, perform a variety of tasks for users. AI also matches prices and cars when one orders for a ride from Uber, Bolt or many car-hailing apps. Some companies also use it to curate what social media offers to a user based on their past behaviour.

Worldwide competition to reap its benefits is intense, and global leaders have emerged on the scene. AI is seen by many as an engine of productivity and economic growth. It can increase the efficiency with which things are done and vastly improve the decision-making process by analysing large amounts of data. It can also spawn the creation of new products and services, markets and industries, thereby boosting consumer demand and generating new revenue streams.

Studies show that AI has a significant economic impact. Research launched by consulting company Accenture covering 12 developed economies, which together generate more than 0.5% of the world’s economic output, forecasts that by 2035, AI could double annual global economic growth rates.

AI will drive this growth in three important ways. First, it will lead to a strong increase in labour productivity (by up to 40 %) due to innovative technologies enabling more efficient workforce-related time management. Secondly, AI will create a new virtual workforce capable of solving problems and self-learning.

Third, the economy will also benefit from the diffusion of innovation, which will affect different sectors and create new revenue streams.
Furthermore, a study by PricewaterhouseCoopers (PwC) estimates that global GDP may increase by up to 14 % (the equivalent of US$15.7 trillion) by 2030 as a result of the accelerating development and take-up of AI.

Blockchain is one of the technologies enabled by the worldwide distribution of computing capacity. Put simply, blockchain is a digital ledger in which transactions are timestamped and recorded chronologically and publicly.

The technology is being applied in a variety of situations, from making cross-border payments to enabling banks to perform remittances faster and at a lower cost.

Currently, many fees are collected by organizations that facilitate cross-border payments. According to World Bank, the global remittances market reached over $613 billion in 2017.

The costs of remittances have been estimated to be up to 5%, and the average transaction fee in sub-Saharan Africa is at an astounding 9% for cross-border payments. However, blockchain can actually bring these costs down to 1%. Blockchain also guarantees real-time transactions across borders and is able to reduce risks existing from currency fluctuations.

Blockchain is a promising and revolutionary technology because it helps reduce risk, stamps out fraud and brings transparency in a scalable way for myriad uses. Blockchain technology is a technological innovation is regarded as one of the primary drivers of long-term economic development.

An analysis by PwC shows blockchain technology has the potential to boost global gross domestic product (GDP) by $1.76 trillion over the next decade. This shows the huge impact that the use of blockchain could have on the global economy.

The adoption of these digital technologies can be a game-changer for the African continent. They possess the potential to boost economic growth and industrialization, alleviate poverty and improve people’s lives.

The African digital economy is one of the largest overlooked investment opportunities of the past decade with the potential for a profound impact on development.

Driving this impact is a combination of increased access to faster and better internet connectivity, a rapidly expanding urban population, a growing tech talent pool, and a vibrant startup ecosystem. Africa has the world’s youngest, fastest-growing, and increasingly urbanized workforce.

These demographics, coupled with the African Continental Free Trade Area (AfCFTA) agreement, which is one major milestone toward harmonization for digital businesses, show that Africa has the potential to become an active contributor in the unfolding digital revolution.

e-Conomy Africa 2020, a report released by Google and International Finance Corporation (IFC), estimates that Africa’s internet economy has the potential to reach 5.2% of the continent’s gross domestic product (GDP) by 2025, contributing nearly $180 billion to its economy.

The projected potential contribution could reach $712 billion by 2050. Africa’s digital economy is transforming development on the continent by fostering economic opportunities, creating jobs, and providing innovative solutions to complex challenges, including access to health care, education and finance.

The use of digital technology and services will drive innovation, economic growth and job creation in many key sectors of the economy, and allow for greater interconnection of African markets with one another and with the rest of the world.

Promoting digitalization in Africa will enhance our impact in sectors such as health, energy, transport, agriculture, education and facilitate access to basic social services, consistent with our broader good governance and development policies and programmes.

A National Digital Economy Policy and Strategy (NDEPS) for a Digital Nigeria was unveiled and launched by Mr President on the 28th of November, 2019.

We addressed the need for a regulatory environment that supports, rather than stifles development, through the Developmental Regulation pillar and we have developed about 15 policies in this regard.

The need to empower citizens with the skills that are essential to thrive in an increasingly digitized global economy is addressed in the 2nd pillar.

We have set up an online training academy that has trained over 210,000 Nigerians in the area of digital technologies, with the training continuously taking place across the country.

The Nigerian National Broadband Plan (2020-2025) addresses the need to provide broadband connectivity as this is critical to any digital transformation efforts.

The Plan seeks to deliver data download speeds across Nigeria at a minimum of 25Mbps in urban areas, and 10Mbps in rural areas, with effective coverage available to at least 90% of the population and a penetration rate of 70% by 2025 at a price not more than N390 per 1GB of data (2% of median income or 1% of minimum wage).

We have already experienced a significant drop in the cost of 1GB of broadband (from N1,200 in August 2019 to N487.18 in November 2020), based on the report we received from the Nigerian Communications Commission.

Mr President launched the Plan in March 2019 and its implementation has led to a significant increase in broadband penetration in the country. The value at the end of 2020 was 45.07%, a massive jump from about 33% in August 2019.

Given the nation’s large, young, and entrepreneurial population, digital entrepreneurship has the potential to become an engine of economic transformation in Nigeria.

The Digital Services Development and Promotion pillar, therefore, supports the development of the digital innovation and entrepreneurial ecosystem.

In addition, we are establishing a National Digital Innovation and Entrepreneurship Centre, the first National ICT Park and have established a National Centre for Artificial Intelligence and Robotics.

The primary objective of these is to create an atmosphere that would usher in innovation-driven culture among the Nigerian populace.

We are also actively preparing to take advantage of Blockchain technologies for our digital economy, and we recently developed a National Blockchain Adoption Strategy.

With the transition to digital platforms, it is crucial that we ensure privacy and the safety of online transitions. This is the focus of the Soft Infrastructure pillar.

Digital identity is foundational to any digitization efforts and we have actively encouraged citizens to obtain their National Identity Numbers (NIN) and there are now over 56 million enrollments.

The current number of monthly enrolments has increased significantly (by about 500%) to over 2.6 million registrations.

There has also been a remarkable increase in the number of enrolment centres across the country with about 3,800 centres available for enrolments.

Privacy concerns that result from digitization are also being addressed in the Soft Infrastructure pillar, through the Nigeria Data Protection Regulation (NDPR) 2019 and the Guidelines for the Management of Personal Data by Public Institutions 2020.

We understand the importance of supporting homegrown innovation and this has been addressed in the Indigenous Content Development and Adoption pillar. We developed a National Policy for the Promotion of Indigenous Content in Nigerian Telecommunications to support this goal.

The stimulation of innovation and the effective harnessing of emerging technologies is central to addressing the African continent’s demands in sustainable development, economic growth. Africa has the opportunity to harness digital technologies as a key driver of growth and innovation.

We need to expand broadband infrastructure, provide our citizens with digital skills, and provide the enabling environment for our digital entrepreneurs to thrive, amongst others.

Therefore, imperative that we work together towards achieving our national and regional development plans in building the Africa we want.

This conference is a giant step in the right direction. On this note, I thank you for your kind attention and wish you very successful deliberations.