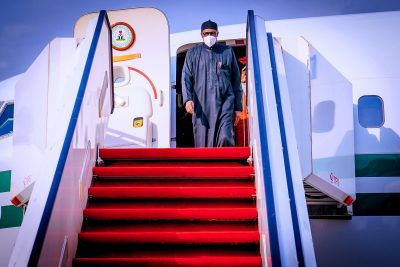 President Muhammadu Buhari is back In Abuja after a Three day official visit to The United Arab Emirates.

The President was received on arrival at the Nnamdi Azikiwe International Airport by his chief of staff Prof Ibrahim Gambari, Inspector General of Police Usman Alkali Baba, Director General, Department of State Services Yusuf Magaji Bichi and other senior Government officials
State House Correspondent Adamu Sambo reports that the President Was in Abu Dhabi to commiserate with the Government and People of the UAE on the demise of the Former President Sheikh Khalifa Bn Zayed Al-Nahyan.
He also felicitated with the President of the Arab Nation Sheik Mohammed Bn Zayed Al-Nahyan for successfully taking over the reigns of power during which the leaders promised sustained collaboration and cooperation between Nigeria and UAE.
Minister of state For Foreign Affairs, Ambassador Zubairu Dada speaks on the Significance of the VIsit.