Two dead bodies have so far been recovered from a seven story building still under construction at Oba Oniru street, Victoria Island lagos, which caved in the early hours of Sunday morning. 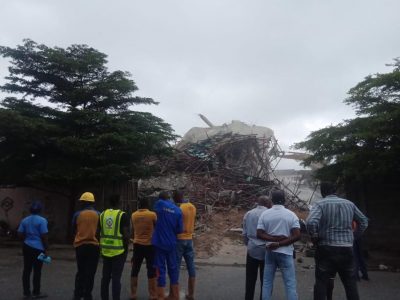 According to Eye witnesses, the building showed warning signs in the early hours of Sunday which prompted some construction workers numbering about Nine residing in the building to escape before it eventually collapsed at about 2 in the morning.

There is a race against time by Emergence responders to rescue more persons trapped in the building while as the same time intensifying operations to evacuate rubbles to ground zero.
Heavy duty tools and equipment have been deployed to the scene to hasten the process.

Residents of the area said, construction of the affected structure began last year, but still ongoing before collapsing