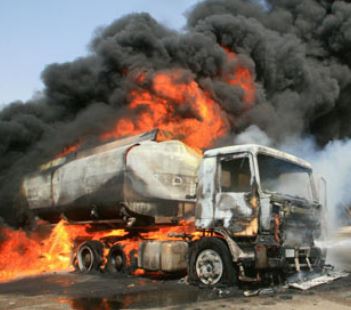 No fewer than ten persons have been burnt beyond recognition following a tanker explosion which occurred Thursday morning around Sagamu Interchange axis of the Lagos-Ibadan Expressway.

Eye witness account says the crash occured when a trailer driver who was said to be on top speed, lost control and smashed the body of the tanker on another tanker that was parked by the road side and subsequently exploded.
Acting Zonal Commander FRSC in charge of Lagos and Ogun State, Olusegun Ogungbemide and the Ogun State Sector Commander Ahmed Umar said two fuel laden tankers, two trucks and a bus were involved in the explosion.

The explosion also affected a building and another lorry.
For now, the Corps confirmed that ten out of twelve persons, involved in the explosion were burnt to death while two passengers excaped.

Bodies of the burnt persons have been taken to the Olabisi Onabanjo Teaching Hospital, Sagamu while wreckage of the tankers were also towed off the road