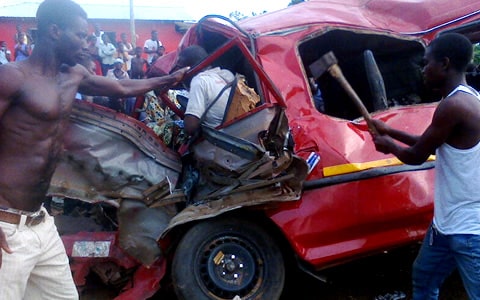 The Corps Public Education Officer (CPEO) Bisi Kazeem said this in a statement on Thursday in Abuja.

Kazeem said that crash which occured at about 14:45hrs was involving 20 vehicles which he said included one truck, one tanker, 12 cars and six bikes.

He said that the crash which was fatal followed a collision between the truck and the tanker with other vehicles thereby causing inferno.

He also said FRSC personnel were deployed to the scene of the crash immediately they were contacted by public-spirited individuals.

According to him, 18 persons were involved in the fire incident. Seven people were injured which had three males and four females.

“11 persons got burnt beyond recognition. Major cause of the crash according to preliminary investigation was mechanical, which was attributed to brake failure.

“Efforts are ongoing to remove the burnt vehicles off the road, ” he said.

Biu admonished the public to always call the FRSC toll free line 122 and the National Traffic Radio 107.1 FM which were always available for all road users to report emergencies at any given time.