Buhari: “No Easy Money To Throw Around” Speech 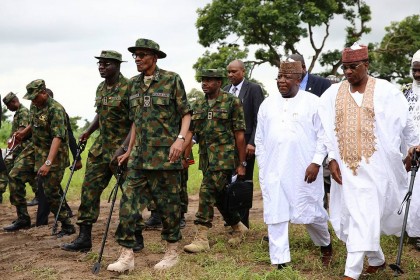 President Buhari – APRIL 2016, Zamfara: I am pleased to be here today to commission various projects executed by the administration of His Excellency, Honourable (Dr.) Abdul’Aziz Yari Abubakar (Shettiman Mafara), the governor of Zamfara state.

To me, coming to Zamfara state is a homecoming for numerous reasons, one of which is that fact that the people of Zamfara have always shared with me a common vision of a Nigeria that is strong, united political entity and a dignified nation. The people of Zamfara have always shared my political ideals and political struggles right from the time I made up my mind to join active politics.

I have always enjoyed the overwhelming support of Zamfarawa since my first contest for the presidency in 2003. I am very grateful to the people of Zamfara: Men and women, old and young alike.

I am deeply impressed by work done by Governor Abdul’Aziz Yari Abubakar. I have known him as one of the performing governors since his first term in office. I could recall that in the days running up to the 2013 Democracy Day, I was invited to commission the multimillion naira Boko Bridge, which is one of the landmark achievements of his administration. I, therefore, commend Governor Yari’s efforts and hope he will sustain the tempo in order to leave behind a more developed and more prosperous Zamfara state.

As the people of Zamfara State are aware, the Change Agenda was the central issue of our 2015 electioneering campaign. You have all agreed to join me and work as agents of change. The challenge before all of us, therefore, is to translate this desire for change into reality. Since this Administration’s assumption of office in May 2015, the journey to fix the country and restore the hope of the common man in the Nigerian project began in earnest.

I, therefore, wish to call on everyone to think closely about Nigeria’s changing situation. There is no easy money to throw around. We must go back to farming, livestock rearing from which we could develop industries. We must collectively put our hands on deck to ensure the success of our mission of re-engineering Nigeria.

I, however, assure all Nigerians that the grim economic problems are a passing phase which all societies go through. Meanwhile, our security situation is improving not only in the north-east but all over the country. We are confident that our macroeconomic policies, as well as the monetary policies being implemented by the Central Bank of Nigeria, will lead to the revitalisation of industries and steady growth in significant sectors of the economy.

Our commitment to secure the country has already started yielding results, as rightly noted by Governor Yari that for the first time in the history of Boko Haram insurgency seven years ago, the people of Borno state celebrated their Eid-il-Fitr with ease devoid of any security barricades.

Let me use this occasion to reiterate that government is determined more than ever before deal decisively with any threat to the security of this nation from any quarters. Part of the reasons I am personally here in Zamfara State to flag-off the military operations aimed at rooting out the menace of cattle rustlers and armed bandits not only in Zamfara State but the entire axis of the north-west.

I also wish to reiterate to the people of Zamfara state and to Nigerians, in general, the commitment of my administration to restoring sanity in governance. We shall continue to prosecute the war against corruption. We do not wish or desire to humiliate or disgrace anybody but we must recover stolen funds and put them to correct public use.

My dear people of Zamfara state, I have listened to the series of requests put forward by your governor. I assure you that we shall carefully study them and respond appropriately. I am fully aware of the potentials of Zamfara State, most especially in agriculture livestock and solid minerals. As our administration is determined to diversify the economy of the country, Zamfara State is certainly a fertile ground that must be harnessed to contribute to the overall national effort.

May I also register my appreciation to the people and government of Zamfara State for the reception accorded me and my entourage. The Zamfarawa are legendary for their hospitality. I am therefore not surprised by the warm reception we have received. But, after all, for me coming to Zamfara State is the homecoming.