Members of the Igbo World Union were at the Presidential Villa, Abuja, on Friday, September 2, 2016, on a courtesy visit, during which they praised President Muhammadu Buhari for his war against corruption, terrorism, and for the dogged effort to diversify the country’s economy.
Led by the President General, Ambassador Sir Mishak Nnanta, the group equally lauded the Change philosophy of the Buhari administration, pledging support for all the lofty ideals of government. 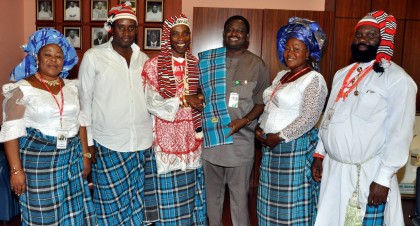 The group was received by the Special Adviser on Media and Publicity, Mr Femi Adesina, whom they described as “a man with goodwill for Nigeria, right from his days as Managing Director/Editor-in-Chief of The Sun Newspapers.”