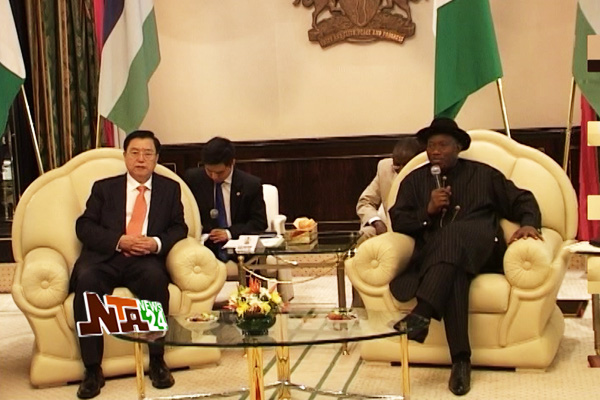 President Goodluck Jonathan has called for greater Chinese involvement in the development of Nigeria’s agricultural sect. It was during his audience with the visiting Chairman of the national peoples congress of China, Zhang Dejiang, who was accompanied by senate president, David mark. President Jonathan said that the federal government would welcome the deployment of china’s renowned agricultural expertise in support of its efforts to positively transform Nigeria’s agricultural sector.

The President reiterated his administration’s belief that the development of the full potentials of the country’s agricultural sector will help greatly in addressing Nigeria’s problem of youth unemployment. As part of his recent state visit to china president jonathan reiterated the Federal Government’s appreciation of the financial support being given by china for the development of public infrastructure in Nigeria. The President expressed delight at the opening of a Chinese cultural Center in Abuja which he said will promote better understanding of Chinese culture by Nigerians and for supporting Nigeria’s bid for the non-m permanent security council seat for 2014/2015.

Mr. Dejiang had informed the president that his visit to Nigeria was his first visit abroad as the chairman of national peoples congress of China.